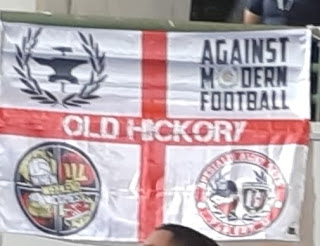 There are many things I loathe about modern football. The apathy shown to fans when it comes to scheduling games for one. The cavalier approach to replica shirts. That oligarchs and any rich twat is welcome to own a club with no responsibility being shown by the authorities to a club's history or traditions. Over zealous stewarding. The choreographed atmosphere clubs want to install in grounds. The stifling of a natural fan-generated atmosphere in order to milk the corporates. The corporates. the dumbing down of commentary, punditry and football analysis. Ex pros stealing a living as pundits based purely on their media mates rather than any ability to offer any interesting input.
The Against Modern Football slogan has spread around Europe and like so many trends has been picked up by fans in South East Asia but may I respectfully suggest if there is one region that would benefit from modern football then it is ASEAN.
Facilities inside most stadiums are non-existent. Ticketing arrangements ae cumbersome. Security personnel aren't well trained. Clubs continue to be mismanaged. Players still go without salaries. In short football clubs need to be run professionally by professional people and not by petty potentates or their cap-doffing appointees.
It's in stricken times like these that a club or its organisation's professionalism becomes evident. Take for example the case of Melaka United's Thai import Naruphon Putusorn. Writing in The Star, T Avineshwaran says that the defender has told the club he wants out after only being paid in February and 25% of his March salary. Naruphon told the club last month he wants out and has also written to FIFA about his unpaid salary.
“I was put in a position and situation that affected my personal finances, my mental and emotional health. It had also put a strain on my pregnant wife and our relationship, ” said the former Buriram United and Suphanburi player.
“My lawyer reached out to find a solution and sent an official letter but there was no response. Continuous promises were made but never fulfilled. So I had to make a decision for the happiness and well-being of my family.”
Yes, we all know what unprecedented times we live in, yada yada. But what seems to be key here is the lack of response, the broken promises. Communication is key at all times but especially so now and a professional organisation would be going out of its way to ensure its employees are kept in the loop, even if there is nothing really to report. Saving face is more important than people's livelihoods?
Then we have Kedah. What a team they had, Marlon Alex James et all dominating the local game for a few glorious years but nothing lasts for ever. Nothing it seems was done to ensure the club could go on being successful and now they are another club that is unable to pay its players. And let's not talk about Kelantan.
The FAM have responded by saying the privatization and licensing procedures they are putting in place will ''install some responsibility among owners on the importance of administration and financial management.''
Although it may seem like I am picking on Malaysia here I really am not. Indonesia? Don't get me started there! Singapore? Where some clubs have taken to looking for players on job-hunting websites?
While South East Asian teams don't need to go down the laissez-faire approach adopted in England they do at least need to be dragged into the 1990s and Johor Darul Ta'zim are leading the way on many levels. In an interesting piece in the NST the crown prince says running a professional football club isn't just about money.
"Pahang had a lot of money, so did Kedah and Selangor but how come they don't even have one training facility? Not even one training ground. How come they don't even own their own stadium until today?
"How come there was barely a plan in terms of gaining income or privatising or to have commercial success for the club?
"I feel at the end of the day, money can get you somewhere but you must have a proper plan to identify, to implement what you want to achieve. 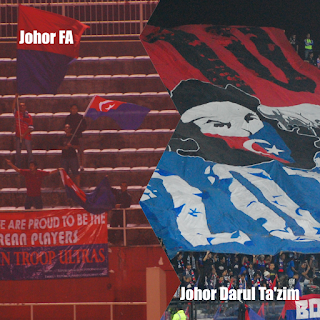 The crown prince is 100% spot on. Facilities. Plan. Commercial success. So many teams don't have a plan beyond breakfast. I've not been to the new ground but I can see from my visits to Larkin Stadium to see both Johor FA and JDT the difference a professional organisation can make.
A classic example of the hand to mouth existence by which many clubs operate is seen in Persitara in Indonesia. Several years ago they had an away game in Jayapura against Persipura. A daunting trip at the best of times, a seven hour direct flight, longer if you transit. Persitara set off with the manager loudly proclaiming in the press the team had no money and he was asking for friends to pay for the plane tickets! The team got as far as Makassar and again the manager had the begging bowl out to pay for the rest of the journey! How can a professional football club operate like that?
So I'm sorry but football in South East Asia does need to embrace 'modern football'. Johor Darul Ta'zim and Buriram United are leading the way but then they can afford to as I wrote a few years ago. Some clubs have coped reasonably well with the crisis even if it only means they are communicating with players but the rest are struggling. In Indonesia clubs like Bali United, Persib, Persebaya, Persija and Arema have the potential to be regional behemoths but have so far shown little appetite for investing in the infrastructure like we have seen in Malaysia and Thailand.
# posted by Me @ 2:20 PM