It was all very last minute but the opportunity was there so I reached for it. Bahrain. The nation that thrashed Indonesia 10-0 in a World Cup Qualifier not too long ago. A tiny island in the gulf home to about a million or so people. And they had the FA Cup on going so I went so there.

Many moons back I saw Bahrain Under 16s compete in an Under 16 event in Jakarta and was impressed by what I saw. Tidy, crisp passers of the ball, good movement. not world beaters but easy on the eye. 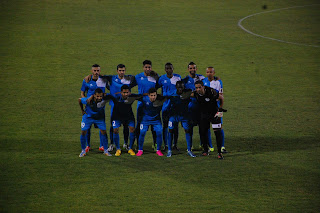 And that pretty much sums up the FA Cup tie I saw at Al Ahli Stadium at the weekend played out in front of a crowd of dozens. Riffa ran out well deserved winners but Bahrain had their moments and all in all it was not a bad game with one good goal to savour, a Riffa striker controlling the ball with his chest, making space and volleying home from about 12 yards.

I will be back for more games in the future not least because there is beer available on the island and there is even a pub crawl to be had and that, as Ratcat once opined, ain't bad!