Way back when, in the distant dawn of time long before there was any social media PSMS had a good team. In 2006, my first season watching Indonesian football, they reached the Copa Indonesia semi finals, defeating Liga Indonesia champions Persik along the way. I remember being quite struck by their toothpaste green and white shirts as well as the fact some of their players names where quite easy to remember; a remarkable achievement for someone struggling with the multi-syllable constructions.

Boy Jati Asmara and Markus Horison were particularly bule friendly names of course. But three other names stuck out and remained with me over the years, names that for me will always be synonymous with Medan and North Sumatra.

So it was, at some ungodly hour while I was checking on my son's online studies the name Mahyadi Panggabean released a flood of long-forgotten memories. I was flicking through a football website and saw he had been appointed coach of Liga 3 side PS Banyuasin. The left sided player was a mainstay of the PSMS side for six years up until 2008, a feat that is surely worthy of recognition in the short term world of Indonesian football, before upping sticks and heading to Persik (twice), Sriwijaya (where he won the Inter-Island Cup twice, the Super League and the Community Shield), Persela and Gresik United.

Seeing Mahyadi still actively involved in the game I went in search of his two team mates who made up, in my mind at least, the Three Batak. 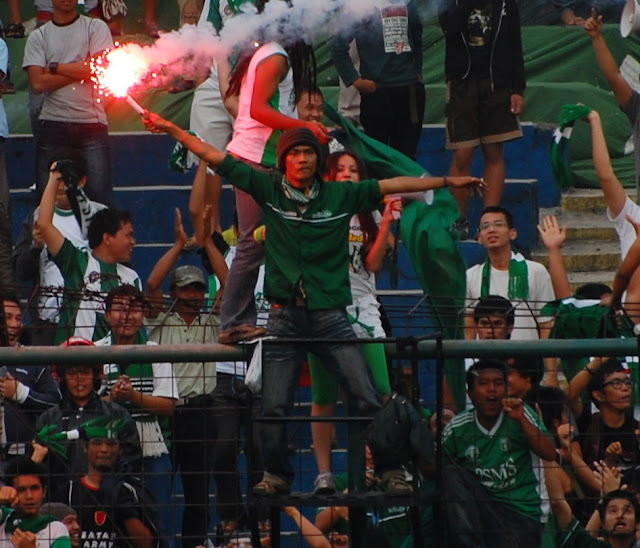 Legimin Raharjo, a midfielder, left PSMS at the same time as Mahyadi, following his mate to Persik and settled a while in East Java where he also played for Arema and Gresik United. After treading water at Pelita Bandung Raya, Legimin returned to his first love in 2015 and seems to have been there ever since. I say seems to. He did go to PS TNI but then given the murky cross-ownership that happens so often they were all but PSMS anyway.

The third of the swashbuckling trio was Saktiawan Sinaga. The bustling forward made 100 appearances for PSMS before joining his two mates moving to Persik in 2008. PSMS had made the cut to the revamped Indonesia Super League by finishing runners up in 2007 but the cash was drying up, they were forced to play some home games in Bandung and in 2008 they were relegated. If the Macan Putih were hoping the Three Batak would help inspire the same success they had enjoyed with the Three Amigos (Cristian Gonzales, Danilo Fernando and Ronald Fagundez) they were to be sadly disappointed as Jacksen F Thiago's imperious Persipura dominated the league.

Persik finished a credible fourth and Sinaga finished the campaign top scorer in the league but they were an eyewatering 25 points behind the champions and the team broke up.

Saktiawan became a footballing nomad, criss-crossing Indonesia from Semen Padang, Mitra Kukar, Perseru, PSS, Pusamania and Persiwa before ending up with Tiga Naga in Liga 2 where he remains as a player.

The years since the Three Batak left have not been kind to PSMS. They returned to the top flight in 2018 and signalled their intentions by appointing former Persib coach Djadjang Nurdjaman and bringing back Legimin in a bid to capture past glories but the team struggled all season and finished bottom.

I can't claim to be a PSMS fan but I do wonder if, in their heart of hearts, supporters long for the day the Three Batak return to Medan and lead in some capacity and lead the club to a glory that has been absent for so long in North Sumatra!