Very few people outside of the Philippines associate the archipelago with football. It's close links with the USA mean many there prefer rounders and netball and the round ball game struggled to attract any interest beyond a small band of devoted followers.
If, for many, English football was invented in 1992 when the Premier League started, then the birth of Philippine football can be dated back to 2010. And instead of a satellite company coming in and changing the rules, an  unknown Scotsman came in and put the game on the map.
Simon McMenemy was appointed national team coach. Previously he had been coaching no-league in England and that had, surprisingly, been a useful introduction to the Pinoy game as he came across a couple of players who were half Filipino including Rob Gier, a familiar face in south eastern non-league circles.
Once in Manila, McMenemy tapped into the Pinoy diaspora as he put together a team that would surprise everyone by reaching the semi finals of the 2010 AFF Suzuki Cup. While the cup run did wonders for the country there was very little in place to make sure Filipino football would improve. There was little in the way of domestic infrastructure, a Filipino Premier League in 2008 was over in less time than it took for a Chinchilla to be impregnated, go into labour and give birth.
In 2010 a Manila centric United Football League was introduced with 16 teams spread across two divisions. When this attempt at a national league ended in 2016, 20 different teams had competed with just three, Green Archers, Kaya and Loyola Meralco Sparks, being there from start to finish. Clubs came and went as owners looked at the game, fancied the perceived glamour and soon folded when they found out the bling cost money. 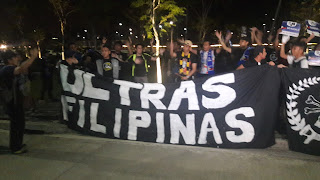 And there was plenty of bling. Local players boasting Filipino mixed blood were in high demand for their supposed good looks and were able to attract high salaries, never sustainable given the lack of action at the turnstile. The Younghusband brothers for example, James and Phil, were born in Surrey and were attached to Chelsea before doing t he rounds in non-league and then becoming household names in the Philippines. One was linked with a big money move to Indonesia but he preferred the security, and familiarity of football in his mother's country rather than taking a plunge overseas.
A new league was introduced in 2017, the Philippine Football League, n the hope of learning a thing or two from the Indian Super League. Eight teams signed up for the first season and each was allowed to recruit four foreign players. Plus they had the pick of the now locally based Tisoy and the all commanded high salaries.
With little in the way of supporters, clubs were heavily reliant on their owners and whatever sponsorship deals could be signed. The AFC seemed to love the Philippines for in 2018 Ceres-Negros, owned by a bus company, entered the AFC Champions League having won the first PFL.
Ceres-Negros went on to win the PFL in 2018 and 2019 and in early 2020 they defeated Shan United and Thai Port in he Preliminary Rounds of the AFC Champions League, setting up a tough trip to Japan to face Tokyo FC. Win that and they would have been playing against Ulsan Hyundai, Shanghai Shenhua and Perth Glory, a quite remarkable contrast to more mundane league fare which brought them up against the infinitely less glamourous Azkals Development Team.
Sadly for Ceres-Negros and the PFL cracks were widening. The coronavirus pandemic brutally highlighted the lack of support the PFL had, both financial and on the terraces. 90 minutes from a place in the AFC Champions League group stage in January, a few months later the owners of the bus company pulled the plug on Ceres-Negros and a new club grew in its ashes, the bizarrely named United City Football Club. Instead of being withdrawn from the AFC Cup, which Ceres-Negros entered by default after losing in Japan, United City now face the prospect of lining up against Bali United, Svay Rieng and Than Quang Ninh, continuing where Ceres-Negros left off. It's almost like the AFC is doing more to back Filipino football than the Philippines is.
Not content with the most successful team calling it a day there have been more shenanigans in the Philippines as confusion surrounds the fate of Global FC. There is another story. Global FC have competed in the AFC Cup on three occasions and even beat Tampines Rovers in the Champions League preliminary round in 2017. They also entered the 'open-to-all' Singapore Cup in five consecutive seasons, losing to Albirex Niigata in the 2017 final. Today it has been reported the new owners say they are no longer the new owners and have nothing whatsoever to do with the club or the salary arrears!
Last year, there were seven teams in the PFL. As it stands there are six with confusion over the fate of Global. As leagues go it was always built on sand and the performances of Cere-Negros and Global around Asia in no way reflect the strength of the domestic league. Rich owners with deep pockets had budgets which allowed them to hoover up the best players but little else beyond that. Half-heartedly I did propose on Twitter recently the Philippines, Singapore and Brunei get together and come up with a kind of ASEAN Mini League. Could a league featuring say for example Tampines Rovers, Hougang United, Lion City Sailors, DPMM, United City and Global be a viable option for the Philippines and Singapore, both of which have stagnant domestic scene?
Certainly, for the Philippines it can't afford to keep subsidizing highly paid players with little in the way of finances coming in through the gate. Without a strong league it home it is unlikely teams will be able to build on their impressive efforts in Asian club competitions.
# posted by Me @ 7:19 PM