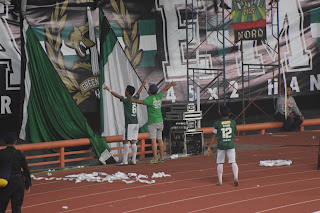 The Liga 2 quarter final schedule and venues have finally been announced. The PSSI have said the two four team groups will be based in West Java for reasons of security and the chosen stadiums are easily accessible.

We are still awaiting details of who plays who on what date. For now the cities of Bekasi and Cikarang can look forward to a large influx of football fans with Persebaya and Persis supporters at least likely to travel in large numbers.

Anticipating trouble, from players or supporters, the PSSI have warned any clubs involved in misbehaviour riks being thrown out of the competition.

As things stand the top three teams will be promoted to Liga 1 where they will replace Gresik United, Persiba and one of Perseru and Semen Padang.