Asia Beckons Not For PSM, Bhayangkara 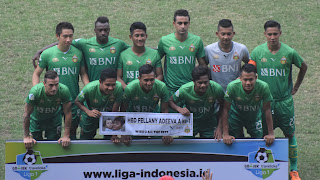 Title challengers PSM, Bhayangkara and Persipura have been told they do not meet the criteria for AFC licensing and as such will not be allowed to enter AFC club competitions next season. Potentially three Indonesian teams could go through to either the AFC Champions League and the AFC Cup in 2018 with the Liga 1 champions entering the play offs for the ACL. The second and third placed teams go straight into the AFC Cup

The news comes as PSM and Bhayangkara at least hold out strong hopes of lifting the Liga 1 title at the end of the season which comes in a couple of weeks.

Quite why these clubs will not be allowed to qualify isn't clear. Certainly Persipura, who have represented Indonesia several times in the Asian club competition, most recent in 2015 before FIFA  suspended Indonesia, can feel hard done by.

Five teams have however been cleared for AFC competition; Bali United who lead the table on goal difference from PSM and Bhayangkara, and Madura United who sit five points adrift. Sixth place Persija, 9th placed Arema and 11th placed Persib could reap an Asian cup bonanza despite their perfromances falling short of earning a spot by merit.

As things stand Bali United and Madura United can start planning for next season leaving Persija to fill the final spot but of course this is Indonesia and anything can happen.

All this is of course mightily depressing for clubs like Bhayangkara and PSM who have led the table for most of the season. Coaches Simon McMenemy and Robert Alberts are to be denied the opportunity to pit their wits against regional rivals because of some pedantic last minute box tickers and promising young players like Evan Dimas and Puti Gede are likely to miss out on some valuable experience.

Not for the first time we are witnessing football authorities scrambling at the last minute to make decisions that should have been taken before the season had even started.