I had to google Persikubar to find out where exactly they came from. Yes, I knew they were from East Kalimantan but where exactly? It's a big province on a big island. Persikubar hail from the town of Sendawar, perhaps an eight hour drive west of Samarinda along the winding Mahakam River. Knowing that, I guess it is a relief it is not Persikubar who are top of Liga 1, just think of the travel times!

Actually, Persikubar are top of Liga 1. It's just they are now known as Bhayangkara and are based in Bekasi with new owners.

When the rebel Liga Primer Indonesia came along in 2011 to disrupt the local game even more than the regular disruptions one of the clubs to join it was Persebaya. This was a major coup for the fledging league, despite falling on hard times in recent years the club from Indonesia's second largest city Surabaya was still a big draw. So big in fact one of their home games in the new league, against Arema, pulled in 55,000 supporters.

This was a bit of embarrassment for the Indonesia Super League, the official league but nothing that couldn't be fixed. Ambitious officials just went out and bought a football club and parachuted them into the City of Heroes. The club they bought was Persikubar. They were rebranded Persebaya and set about trying to reclaim their rightful place in the top flight. 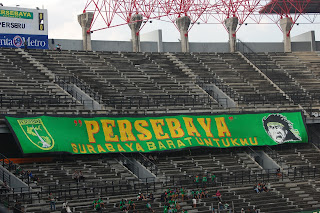 The fans weren't having it though and made their loyalties clear by supporting the side in the rebel league. Persebaya plodded along despite some heavy investment, attracting low crowds in the cavernous Bung Tomo Stadium.

Once the IPL gave up the ghost the Persebaya fans refused to transfer their allegiance to the one remaining Persebaya seeing the club for what it really was, a naked power grab. They wanted their Persebaya back and began a long struggle of attrition which from which they emerged triumphant in the second half of last year.

This new Persebaya plodded along though, seemingly indifferent to the apathy or animosity they generated everywhere they went. Come 2015 and the FIFA suspension the club owners belatedly started to realise no one liked them and perhaps they should do something to make themselves more popular. With a startling lack of understanding of the local football culture they decided to rebrand themselves as Surabaya United, in effect trying to kick the stool from under the feet of those fans they were trying to attract. There was one football club in Surabaya and that was Persebaya and the city's football fraternity were united behind them.

The farce continued in the middle of a tournament when the club desperately changed name again, this time to Bonek, hijacking the name of the Persebaya fans. Seriously, did they expect the very supporters who had been staying away for several years in protest at the presence of this usurper would certainly drop their opposition because their name had been stolen and used like this? 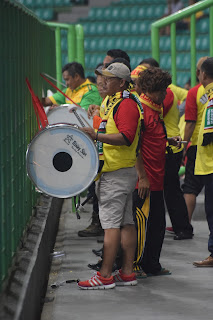 In 2016 the police started to take football seriously and entered their own side, PS Polri, in the competitions that filled the void left by the FIFA suspension, in the Piala Bhayangkara. By the time the unofficial league, known as Indonesia Soccer Championship, started in that year PS Polri had pretty much taken over Surabaya United and moved the club from Surabaya to Sidoarjo.

Now of course they play in Bekasi and under Simon McMenemy they are on their way to their first ever title following their 3-2 win over fellow title challengers Bali United yesterday. With seven games remaining Bhayangkara are four points clear at the top of Liga 1. The idea that Bhayangkara, with no fan base beyond off duty police officers bused in on match day, should be challenging for the biggest honour in Indonesian football is quite remarkable, especially when you consider they are up against the likes of more established names like Persipura, Persib and Arema.

But football is changing and Bhayangkara are at the forefront of those changes. Meanwhile, back in Sendawar I wonder how many Persikubar fans are looking at the league table with a bitter taste in their mouth feeling this success has come at a price.