Indonesian Football Limps Into The 1990s 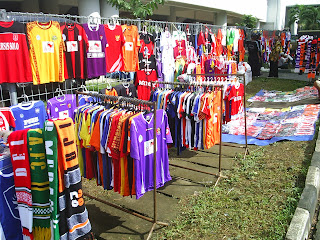 Football clubs need money. All those players need paying and in Indonesia plane tickets need to be reserved and hotels booked. The money needs to come from somewhere but for too long too many clubs have lived in denial. Brought up on a culture of handouts from local government clubs have muddled along, often under the tutelage of local government appointees who may or may not be big football fans. A club's success or otherwise even now often depends on the flights and fancies of local power brokers with their own agendas.

When I first started following Indonesian football funds would come from local governments and sponsorship came from tobacco firms or state owned enterprises. The first two are now, officially at least, closed as sources of revenue meaning clubs are now being forced to enter the market place in search of sponsors and all too often they lack the staff or the expertise to negotiate these commercial waters. Fortunately some companies do recognise the value, and the reach, of football and they have taken to approaching the clubs themselves offering to get involved at some level in return for prominent exposure. Whether the club is getting the market value in return remains open for debate.

TV revenue and sponsorship provide a huge chunk of a club's day to day costs like in many countries. Matchday revenue doesn't. Ticket prices are kept low because many of the supporters come from less well off backgrounds and as they provide the passion and the spectacle on the terraces no football club is willing to price their lifeblood out of the game (unlike in England for example).

Merchandising is an essential part of a football club's brand but it is an area they have been unwilling to exploit until recent years. Fans love to identify, or been seen to identify, with their favourite team and of course replica shirts are one of the most popular ways of doing this. Bizarrely it is only in recent years that we have seen clubs recognise the potential and start to market replica shirts to their support base. When I used to ask why I was told fans wouldn't pay for the original, they would prefer to buy the cheaper knock offs widely available outside stadiums on any given match day suggesting a sweeping generalisation of their fans not all would appreciate.

Football's suspicion of the entrepreneurial DNA runs deep. With the ASEAN Football Federation Cup last year when Indonesia reached the final it was difficult to find national team shirts in specialist stores for example. The manufacturers it seemed didn't trust the market to buy enough shirts to make mass production worth their while. The short term, penny pinching mindset flows down the football pyramid in a manner that would have proponents of trickle down economics fuming at the inverse of their thinking. So many clubs lack the staff or resources to build a fully functioning merchandising department; in effect Indonesian football clubs operate season to season. A coach is appointed by whoever is on this year's management committee and the appointed man is told his budget for the season and told to cut his cloth accordingly. Once the season ends the management types will essentially go into football hibernation, back to their day jobs, only to reemerge in time for the new season. There is no planning ahead, there is no club infrastructure to speak of that keeps things ticking over season to season. Hell, we see this at the PSSI whenever a new guy takes over and he has to bring his people in who need to learn the job as they go.

For an outsider like me this is nuts. How the hell can clubs as massive as Persebaya, Arema, Persib and Persija operate on such a hand to mouth existence? No wonder they are incapable of mounting a sustained bid for success not just in Indonesia but abroad.

The only constant in Indonesian football are the fans and it is the fans who have been quick to fill the vacuum caused by club's lack of know how. If you want to know what is happening at a club you don't go to their club's official media. Too often they don't have a dedicated press officer so any news that is released must wait for someone with a few moments to spare and that someone could be on the coaching staff or a relative of a high ranking official. But with some supporters hanging round the club 24/7 websites, blogs and social media accounts grew up to fill the void. They were on the ground and they were the ones to release the latest news real time along with videos, interviews or direct quotes.

Likewise with merchandising. With the clubs unable to get products out to the fan base supporters took up the slack and some have become so successful they have developed their own ranges of branded clothing or terrace wear. Those who say business has no place in football are behind the times; business has always been there in the form of cottage industries providing supporters with the scarves and t shirts they crave as well as employing their mates and making a few bob. In fact, ahem, my book Sepakbola - The Indonesian Way Of Life looks at some cottage industries in greater detail.

Now though, and slowly, things are changing and some clubs are dipping their pinkies in the waters of commercialisation. Persib led the way and Persebaya are taking massive strides as they emerge from years of darkness under new ownership which knows a thing or two about making money. And now, finally, Persija have their own shop. Actually it seems to be run by the fans but the club are providing a few bits and pieces, including 100 shirts (!) and will look at adding more stores if this one is a success.

Persija are the biggest club in the capital of Indonesia and they are giving a shop 100 shirts to sell! A club that average 28,000 at their home games. West Ham United are the fourth largest club in London and they have three large stores, each in areas that attract large numbers of visitors every day. What is good though is that Persija are working with the supporters to make merchandising available. It is a start. Other clubs haven't even go this far yet.

Indonesian football is changing. New clubs with new money have usurped the old guard on the field while off it some clubs are embracing a form of professionalism we haven't seen before. Club merchandise is another step forward. There are still plenty of elephants in the room, much to complain about and much that holds back the game, but change is coming from within, at a glacial place perhaps but still change that could, repeat could, enable the brave to go toe to toe not just with the best in Indonesia but also overseas.