Being Thai is Not Enough To Challenge Asia's Best

That Thailand have been the preeminent force in South East Asian football for the best part of two decades is indisputable. Since 1996 they have won the ASEAN Football Federation Cup five times and triumphed in the SEA Games in 11 out of 13 competitions since 1993. When it comes to regional bagging rights the War Elephants fear no foe.

Ever since the days of the dream team at the Hiroshima Asian Games in 1994 when the likes of Zico and Tawan first made their impact on the region the Thais have been a conveyor belt of talent with players like Datsakorn, Theerathep, Kawin, Theerathon, Teerasil and Chanathip almost effortlessly making headlines around the region. The English football media like to croon about the likes of Rooney, Lampard and Gerrard; how would they react to almost 20 years of top players following one after another like we have seen in Thailand?

Sadly for the Thais being such big fish in a small puddle does not translate into success beyond the borders of ASEAN. Yes, they were able to escape their World Cup 2018 qualifying group along with Iraq but they received some help along the way with Indonesia being kicked out and Chinese Taipei being so hapless. Against strong opposition, Iraq, they could only draw both times. But enough was done against their rivals, also including Vietnam, they finished top of the group and guaranteed themselves a pop against some of Asia's real big boys.

Japan, Saudi Arabia, Iraq (again), Australia and the United Arab Emirates. Not an easy group for the best team in ASEAN, in fact not an easy group for many nations around the world and so it was to prove with the Thais picking up just two points, from draws against Australia and UAE, and losing the rest including heavy defeats away to Iraq and Japan. Eight defeats from their 10 Round Three games, six goals scored. When Thailand escaped the comforts and familiarity of their ASEAN puddle and swam with the big fish they became mere morsels for the true Asian predators.

The Thais weren't competing alongside the continental powerhouses, they were cannon fodder. Sad to say but for all the talent the nation has produced, and looks likely to continue to produce Thailand are no nearer becoming one of the elite football countries in Asia. 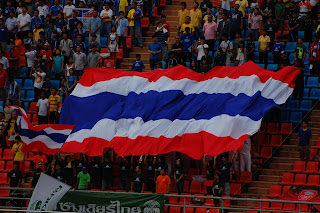 So what is holding them back? Their advantages over their ASEAN rivals are clear to see. Professionalism, diet, upper body strength and discipline set them apart from their corner cutting neighbours. There is also an element of consistency in player selection, something sadly lacking in Indonesia for example, for the national team and a strength in depth others can only drool over. The FA there regularly play host to international sides beyond the narrow parameters of ASEAN with the Kings Cup, featuring Belarus and North Korea, something their rivals do only sporadically.

But they are not serious contenders to go into the draw for the World Cup nor the AFC Asian Cup and don't appear to be for some time to come.

I can't help think the domestic league culture
is partly to blame. Take away Buriram United and Muang Thong United with their deep pockets and you are left with a handful of clubs who can/could challenge for honours, and I'm including Bangkok Glass, Bangkok United in this category but the bulk of the teams in the top flight are there to make up the numbers and yo yo between the top two divisions. Leaders Buriram are 13 points clear of fourth place Chiang Rai United and average more than two goals a game. Many club owners lack the resources, or the will, to fully invest in their club and this is to the detriment of the league as a whole and the national team by extension.

It is all well and good the Thais opening their doors to players from the ASEAN region, a project that has yet to take off and anyway the benefits of playing for a team like Navy or Port are lost on me from a developmental point of view, but perhaps what is needed is for more players to follow in the footsteps of Chanathip and head overseas. There is little doubt the Thai Messi, what an awful nickname, will benefit from his stint with Consadole Sapparo in the way the likes of Zico, Tawan and Datsakorn did in previous years, but there needs to be more taking the plunge to learn a new culture, escape their comfort zone.

Money no doubt is one reason why players are loathe to pack their bags of course. Zico et all played in a league that was more a collection of letters, SET, BBC, KTB, RTP etc, with little passion and little money available. Football is a vastly different game than what it was a generation back. But for Thai football to go from being whipping boys to the region's powerhouses to competing on a level playing field it needs some of the current generation to forsake some khao pad gai and som tam for the good of the country.

And not just the players. When Zico was replaced as coach of the national team he spurned offers work overseas for mid table life at Port. A missed opportunity there. Where 20 years ago he was a trendsetter, a beacon for younger players following in his wake, now he succumbed to familiarity and banality by taking over a middling side with little prospect of honours beyond a good cup run.

The notion of being Thai, khwam pen Thai, which children are taught at school makes for a colourful tourist experience but it is limiting when it comes to moulding players and coaches to compete at the highest level.