A Stadium Only A Football Fan Could Love

Set in a leafy suburb in the north of Balikpapan, Persiba' homely Parikesit Stadium, more commonly known as Persiba Stadium, has outlived its usefulness. Hemmed in by bungalows belonging to state oil producer Pertamina, the stadium was as low rise as its environment. With a capacity of around 6 or 7,000 it was ill equipped for hosting any large crowds that may have wished to see the Honey Bears in action but those who did make their way to the stadium contributed to a vibrant, intimidating atmosphere at this homely football club. 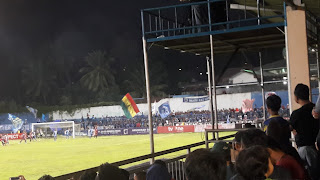 For starters it was a proper football ground. None of this running track malarky, the Parikesit was built for football and used for football. It had one rickety stand with wooden seats and more fences than an average zoo to interrupt the spectator's field of vision. VIP seats? You had a clear view straight ahead but struggled to get a good view of all four corner flags without craning of the neck  or moving to another wooden bench.

Behind the goals were terracing, again behind high fences. I never stood at the ground but the view can't have been much better and were any fan to be stuck behind me well it's fair to say they wouldn't have seen much at all. Three sides of the ground were joined by the single terrace of uniform height, low in other words, and while Persiba often struggled to get large crowds the view may have been reasonable enough, big games were known more for the discomfort the fans felt as much as any action on the field.

But it was home to the Persiba support and as with fans all around the world they loved their stadium. It was theirs after all. They had grown up there, they could mark pivotal moments in their life through games seen. Despite the poor sightlines many supporters had their favourite part where they would congregate with their mates on match day and share the agony and the ecstasy of match day, the good times and the bad of following this unfashionable football club in East Kalimantan.

My visits there would remind me of my visits to Coventry City's old Highfield Road or the Dell at Southampton, venues built in another time for another audience where creature comforts were low on the list of priorities. Distance adds a touch of sepia to the memories, nostalgia for a proper football ground with character that have grown organically above the modern soul less bowls designed by suited architects who now a thing or two about theory but little about terrace culture.

On my last visit to Balikpapan one fan waxed lyrical about the stadium. 'It is part of my life,' he told me in his house after we had seen Persiba hold title challengers PSM to a draw. 'No, it wasn't perfect but I grew up there, I learnt so much about me, about life, about people. It was ours.'

And he's right. A stadium feels like it belongs to supporters because of their memories and shared experiences over many years, passed down from generation to generation. Each part of the stadium holds vital stepping stones of our lives and no matter how ugly, how uncomfortable they are we love them because of what they represent.

There is no doubt Persiba are now in a better place. The impressive looking Batakan Stadium looks the business from the air and while 46,000 may be a tad optimistic for the local side it certainly offers the opportunity of hosting more high profile events in the future though a Legends game between 40 something ex Arsenal and Liverpool players in November doesn't come into that category.

It's been a nomadic campaign thus far for Persiba, and a campaign mired in a relegation struggle. The Batakan is the third stadium they have used after Gajayana and Parikesit and despite the results the fans have been turning out in large numbers. Just under 3,000 saw the team's last game at Parikesit, a 2-1 win over PS TNI where, unlike teams like Arsenal and West Ham United, little was done to mark the end of an era. Instead home games at the Batakan have seen first 10,000, against Gresik United then 15,000 against Semen Padang, neither particularly attractive opposition with no offence, suggesting the Balikpapan public are willing to get behind their team in a more comfortable environment.

Yes, I am sad to see the end of Parikesit Stadium and I can see my next visit to a Persiba home game being accompanied by moans about the new stadium but it is progress and if the Persiba fans keep coming in such numbers perhaps I should just shut the crap up!