My Favourite Grounds In Asia

I was inspired to do this post by an article on the AFC website about the 16 best stadiums in Asia. Now, normally I don't bother clicking on these sorts of stories, they're just fluff, but we are in a bit of a lull in Indonesia, action returns Monday, and it did get me thinking which ain't always a bad thing.

From the 16 chosen by the AFC, not sure what the parameters were, I have been to just four; Rajamangala, Bung Karno, My Dinh and Bukit Jalil. No surprise there. But if I were to choose my own favourite stadiums none of them would appear on the list. Bung Karno for example maybe a cavernous arena but it is a bowl designed by the Soviet Union with all the aesthetic charm you might expect from them. Plus, it has a running track and I detest them at stadiums.

I'm not going to list all the stadiums I have been to in Asia but here is a break down, country by country.

Out of that little lot which grounds tick the boxes for me? For a start I don't like those with running tracks round them. I much prefer arenas where fans are right up close to the action. I also don't like this new breed of stadium where architects have exhibited their love of wavy roofs. Give me something compact with a bit of history, not always possible, and character and I'm happy.

So, in no particular order except the first here we go with my own fluff! 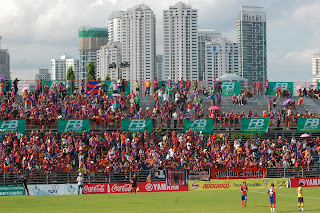 1 - PAT Stadium, Bangkok
I just love the way  this stadium has grown organically over the years. Nice atmosphere, easy to get to, proper football club. 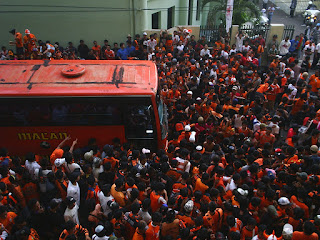 2 - Lebak Bulus, Jakarta
Now sadly no more, this was the first ground I went to when I started Jakarta Casual. It only held about 12,000 supporters but bloody hell, the
atmosphere they generated...especially under the lights. I have seen international players just gaze in awe at the seething mass of humanity singing and swaying as one on the terrace. 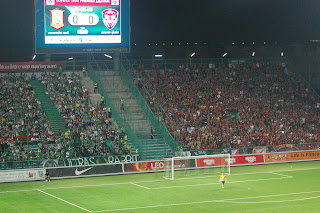 3 - Leo Stadium, Pathum Thani
You gotta admire the sheer ambition of this stadium. There was only three sides last time I visited but but boy, what can be done with a bit of cash and imagination. A three tier terrace I ask you!

A segregated terrace behind the other goal does wonders for the atmosphere when there is a large away following. 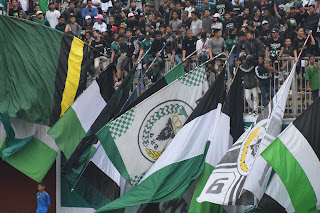 4 - Maguwoharjo Stadium, Sleman
Difficult to get to by public transport but well worth the effort and expense. PSS's stadium has been nicknamed the Indonesian San Siro after curly bits on the outside. But inside, oh boy. Like I said, well worth the effort. PSS fans were recently featured in a Polish fan culture magazine and I expect more and more fans from around the world will be making a bee line to one of the hottest atmospheres in Asia. And all this at a second tier club! 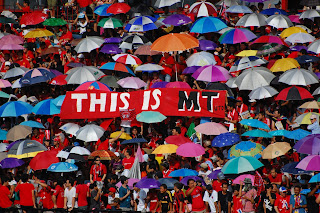 5 - The Thunderdome, Muang Thong
As they say, I love what you have done with the place. Nice, compact, this arena shows what can be done when you own your own stadium. Small on the capacity side but big enough for the Thai league. 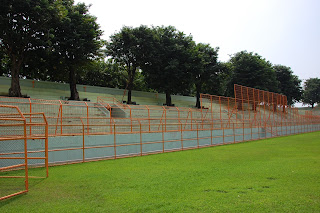 6 - November 10 Stadium, Surabaya
Sadly never saw a game here but what's not to love? Uneven terraces, a moat that was designed to keep fans off the pitch but never did its job particularly well and trees growing out of the terraces. And, as an Arsenal fan, we lost here in a friendly in 1983! See, I am neutral! 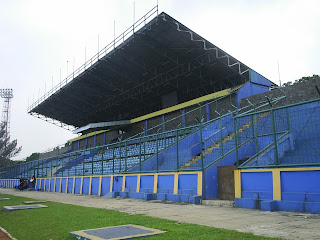 7 - Siliwangi Stadium, Bandung
How lucky are Persib? They have the pick from Si Jalak Harapat, Bandung Laut Api and Siliwangi Stadiums. While they have outgrown this particular venue, it only holds around 22,000, surely some other team could use it once in a while? As well as Persib I have seen PSMS and Persita play home games here over the years. Fairly central as well. 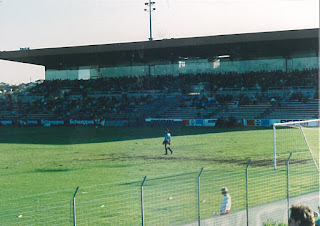 8 - St George Stadium, Sydney
Last I heard it was falling to pieces but it's my list and I want some sentimentality. Got to know about the issues in the Balkans in this stadium back in late 1980s, early 1990s. Used to go with a good group of lads to see St George, home and some away, Home games started in the Brighton le Sands Fishing Club not too far away for a few beers then on to the ground.