Uniform Sides Struggle For Fan Base Across South East Asia

Love them or loathe them it seems the uniform sides making their debut in Indonesia's top flight are in it for the long haul and if the first few games are anything to go by they are among the division's entertainers with goals galore in their games. PS TNI are now 6th following their 4-1 reverse at Madura United last week but their 7 games have produced a league high of 22 goals while Banyangkara's games have produced 20 goals.

Plenty of entertainment then for the fans and with players like Evan Dimas (Bhayangkara) and Manahati Lestusen (PS TNI) the two teams field some of the most exciting young players in the country. So, what's not to like?

When Bhayangkara hosted PS TNI at Patriot Stadium recently the game was watched by 4,850 fans, a season high for the team once known as PS Polri. Or Surabaya United. Or Bonek FC. And among that number were very few paying punters with the vast majority of the crowd being off duty personnel from the respective service having a day out with their mates, given free tickets and a packed lunch. PS TNI's best crowd was 6,100 against Persib, a figure that would have been well padded by away supporters who wouldn't have had to travel far.

Both sides of course lack a natural fan base having been parachuted into towns with well established local sides. Bekasi of course has been without a league side for a while now following the merger of Persipasi with Pelita Bandung Raya and their subsequent sell out to Madura, hundreds of miles to the east. There is a third side, Persikasi, who usually play in the lowest reaches of the football pyramid. Meanwhile Persija have chosen Patriot Stadium to be their home base while Bung Karno is being renovated ahead of the Asian Games next year and they of course regularly bring crowds in excess of 20,000 to their home games. Bhayangkara's average attendance is a mere 3,700 despite the ease of access to the stadium. That number is 18% down on last season's average when they played in Sidoarjo though of course it is likely to increase substantially when/if Persib and Persija come to town. To be fair the cops have made efforts to attract local support with the formation of a supporters club, called Bhara Mania, but it is early days and there is no way of telling how many fans they will be able to attract from the Bekasi area. 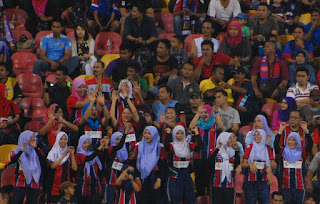 PS TNI's average crowd of just over 2,500 is the second lowest in Liga 1 and is more than 50% down on last season when they also played at Pakansari Stadium. The army side's stadium, like the venue in Bekasi, is new and holds around 30,000. Cibinong however is already home to a local side, Persikabo who play in Liga 2 and while there were times last season when some of their fans attended PS TNI games that doesn't seem to be the case this season.

For sure, many fans are annoyed at the way in which the military sides have suddenly arrived on the scene by purchasing more established sides'  licenses. Unlike other leagues in South East Asia this is the first season with both a military and police backed side in the top flight so we are in virgin territory here but lesson from around the region suggest neither side will be successful in attracting a fan base beyond people who share the same uniform. 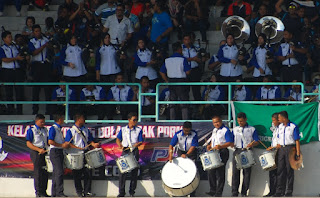 Let's look at Malaysia for example. PDRM (fans pictured left) and ATM (above) have been around for years now and this season find themselves playing in the second tier Premier League. Unlike Indonesia where clubs outside the top flight can still attract healthy attendances as far as the average Malaysian football fan is concerned if you are not in the Super League you don't exist.

Like Indonesia, both PDRM and ATM lack a viable home base and tend to move from stadium to stadium. This year the Cops started the season at Paroi, home to Negeri Sembilan and their biggest crowd of the season, over 4,000, came when they hosted their co tenants back in February. They have played their most recent home games in Melaka with no evidence of fans turning ut in large number since the move. ATM on the other hand are playing in Tanjung Malim and when they hosted PDRM the attendance was recorded as 153.

Back in 2012 though and ATM were the minted club of Malaysia. They were being called the Manchester City of Malaysian football, made some big money signings and won the Premier League at a canter, scoring 72 goals in their 22 games, as well as finishing runners up in the Malaysia Cup. And that was it. They finished mid table in the Super League and in 2014 only escaped relegation by goal difference. Twelve months later they finished 11th with a meagre 11 points from their 22 games and were back in the Premier League after losing a play off and last season finished 11th. The dreams of becoming a major player in local football soon fell apart and with Johor Darul Ta'zim changing the benchmark ATM couldn't compete or didn't want to.  I saw ATM play at Kelantan in the Malaysia Cup semi final and they were backed by a reasonable away support. Certainly more than are currently watching them. No glory, no fans.

Thailand take the uniform fetish even further. They have an Army United, Police Tero, Navy and Air Force Central with the middle two in Thai League 1. Navy average 2,700, the Cops 2,000. In Thai League 2 Army are pulling in less than 1,000 while the Air Force have a division high average attendance of 3,722. Doncha love Wikipedia?!

The numbers show that once a uniform side drops out of the top division in their respective country base commanders lose interest and because these clubs lack a natural fan base they end up playing in front of small crowds which only swell should there be a scent of a promotion challenge. The implicit message is supporters don't really want to follow a uniform side, they prefer to support a team with which they can identify. It's not rocket science for football fans and even in Singapore they seem to appreciate this as they rebranded their own uniform sides as Home United and Warriors in a bid to attract support from the wider community.

For me I'm just enjoying the opportunity to see some regular football and when schedules allow I am happy to go along and see both teams. But if there is a conflict and for example other more established sides are playing at home then I would prefer to go and see them. I'm English and I don't feel uniform sides have a place in professional football and judging by the crowd figures that is a sentiment shared by others.