With the exception of the odd game the focus here has been on Liga 1 but in many ways the tougher league this season is Liga 2. There, eight groups with 61 teams are fighting for the right to play in next season's second tier. Teams finishing outside the top two face the drop in what is being described as the biggest relegation ever.

As things stand the top two from each group will go through to the second round while the next four will go into a play off to avoid relegation. The bottom four teams will have to contemplate life in Liga 3 next season. As you can imagine the pressure is really on, no more so than at some of the bigger clubs, those with history and a large fan base, to ensure they will not have to face an uncomfortable future in the lowest tier. 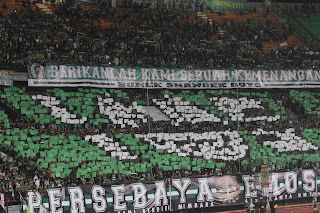 And there are some big clubs in Liga 2. Clubs with fan bases that dwarf so called big clubs in Malaysia and Thailand. Clubs with a history that pre date the Johnny Come Latelys like Buriram United, Muang Thong United and Johor Darul Ta'zim. Sadly they lack the sugar daddy who can make their dreams come true. All the same clubs like PSMS, Persita, Persebaya, PSS, Persis, PSIS, Persijap, PSIM, Persik and Persikabo could together form a pretty decent looking league with large crowds assured.

Then we have newer sides with ambitions of their own. PSCS, PSGC and Martapura spring to mind in this category. And what about clubs who have moved city and changed their name in a bid to join the top table? Celebest, Lampung Sakti, 757 Kepri Jaya.

The pressure to at least stay in Liga 2 has forced clubs to aim high with some appointing coaches who boast more than decent pedigree in the top flight. Arcan Iurie, Raja Isa, Fernando SalesCarlos de Mello and Jaino Matos are among the foreign coaches who have been turned to in search of the promised land. Meanwhile local coaches such as Jaya hartono, Bambang Nurdiansyah, Nova Arianto, Subangkit and Fredy Muli are among a host of big names trying their luck in this most hottest of leagues.

This weekend sees the last round of fixtures before the Liga 2 stops for the fasting month and this is how the tables stand as of now.

As an example of the strength in depth in Liga 2, Persijap host PSS today while PSIS meet PPSM and PSIM take on Persebaya tomorrow. Sadly we don't seem to be getting the attendance figures for Liga 2 games this season so no idea how many will be watching these three games alone. And even for me, in my football starved area, I am spoiled for a game on Sunday with Persita v Persika, Pro Duta v 757 Kelpri Jaya, Persikabo v Persikad and even Persija v Bali United in Liga 1!

With a number of the groups still very tight, for example just two points separate all seven teams in Group 7, the climax to Round One could get very messy and very bloody. I wouldn't want to be a ref or linesman!