It hasn't been a good season for coaches so far in Liga 1. Two were replaced before a ball was kicked in anger and since the first games on 15th April a further three have been removed from their poistions (at PS TNI, Persiba and Bali United). It could have been four had Persib bowed down to a fan led campaign on social media calling for Djadjang Nurdjaman to be sacked after seeing their team draw their opening two games. Fortunately Persib stuck by their man and they are now second in the table after a run of three straight wins.

The next coach to feel the heat is Teco at Persija. While Persib have won their last three games their bitterest foes have lost their last three, failing to score in any of them. Long time Persija followers will know things haven't been going well at their club for a while. Last season's Indonesia Soccer Championship campaign was disappointing as they finished 14th and only managed to score two goals in a game on three occasions. 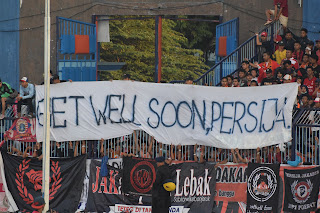 Since the inception of the Indonesia Super League the club from Jakarta have failed to mount a sustained bid for the title. The last time they came close was in 2007 when they finished as losing semi finalists in the old style Liga Indonesia though 2010/11 saw them finish a credible 3rd eight points behind champions Persipura. Their last success came in 2001 when they were champions. A trophy drought that has lasted 16 years and shows no signs of going away any time soon.

Following their 1-0 loss away to Persela yesterday Persija fans were quick to take to the internet calling for Teco to be sacked in what is becoming a sad and predictable knee jerk reaction. But should the fans' reaction be seen as a knee jerk response to three losses and 288 minutes without a goal or should it be considered in the context of another season that promises little in the way of success if the first few games are anything to go by.

At the start of the season a new guy took over at the club and as is often the way with these takeovers it was greeted positively by the fans desperate for a return to the glory days. But Indonesian club owners tend not to be cut from the same cloth that produced Roman Abramovich. They don't see their club as a rich man's toy. In fact I am not sure what they see the club as in many cases.

Coach Teco has worked hard to improve the squad though some signings were left a little late. In have come Luis Carlos Junior and Bruno Lopes to add a more muscular presence up front. In fact when you add Rohit Chand, Gunawan Dwi Cahyo and William Pacheco you have got one of the more physically imposing line ups in the Liga. Tellingly, with Persija chasing the game he pushed on Bambang Pamungkas and Rudi Widodo, in other words the more traditional approach.

The performance of Persela's Ivan Coehlo though showed how a big target man who is effective on the ground can unsettle defences. His was not on a physical presence but he showed a deft touch on the ground as well, a constant thorn in the Persija defence. At the other end however the Persija attack was profligate with the chances they had, threatening to scare birds nesting in the trees behind the goal rather than Choirul Huda in the Persela goal.

I don't think Persija played too badly but that is immaterial in the minds of the fan base. Around 800 headed to East Java for the game and they went home bitterly disappointed at the result and the lack of goals. They seem themselves as a big club and the inability to make any serious challenge for silverware season after season is frustrating them and as an Arsenal fan I feel some sympathy with them!

The easy target when tempers boil after another loss is the coach as we have seen too often this season. Sadly for the coach he is not always the correct target but most fans know there is little that can be done with the way their club is being run. This plus the cultural deference that is shown to people of status means for many attacking the club owners, be it any club, is a faux pas (which puts the actions of Persebaya fans in recent years into sharper focus).Too often owners, and again I am not just talking about Persija, want to be seen to be listening to fans and can bow to their wishes in a bid to look popular. But sometimes what a football club needs is time. Persija fans though feel 16 years is more than enough time. In the middle sits the coach.