Persija have said they will give their coach Stefano Cugurra, also known as Teco, two more games before deciding his future. This follows a poor start to the season when, after defeating Persiba 2-0 in their opener, the last five games have seen the Macan Kemayoran pick up two points from their last five games.

Fans protested after the 1-0 loss away to Persela and the protests grew after Persija conceded a last minute equaliser to Mitra Kukar last weekend.

Persija's next games are at home to Bali United this Sunday and a tricky away game at Perseru, a 5,000 kilometre trip to a stadium where visiting teams rarely leave with much more than jet lag. 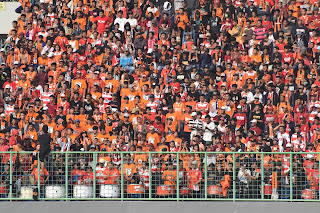 Club chairman Gede Widiade, who recently held an open house where fans and players got together to discuss the poor start to the season, says the two game target is not an ultimatum but a professional target. ''We continue to evaluate performances and will make a final decision after the Perseru game,' he said.

Reading between the lines there seems to be an unwillingness to follow the leads of other clubs who have already replaced their coaches so early in the season and Gede talks about having no candidate lined up to replace Teco nor does he feel sacking the Brazilian will change much. 'If I stop now it will not solve the problems.'

He is right. For a football club with such a large fan base Persija have been a case study of how not to run a football club for so long now it stopped being funny years back. A new approach is needed within the football club but it takes time to create a professional ecosystem and football fans are notoriously short of patience with some Persija fans demanding Rahmad Darmawan stop what he is doing in Malaysia immediately and return to the club he has coached three times, winning nothing.

Persija started the season well, following up the win at Persiba with a draw against Barito Putera in Bekasi. The wheels then fell off the campaign with three narrow defeats against PSM, Madura United and struggling Persela, all by the same 1-0 margin. A return to winning ways looked on the cards against Mitra Kukar last time out before ex Liverpool midfielder Mohamed Sissoko scored a late equaliser.

The club have found goals hard to come by in the last couple of years and despite the recruitment  of Bruno Lopes and Luis Carlos nothing much seems to have changed in 2017. The failed to get out of the group stage n the President Cup, defeating PS TNI, drawing with Arema and losing to Bhayangkara. Things didn't improve much in the Cilacap Cup, losing 2-0 to Madura United and beating hosts 1-0. Fans with long memories are casting their minds back to the 2013 season when they too won just one of their opening six games. They finished that campaign in mid table.

Teco remains confident he can turns things around and doesn't feel the team is playing badly. 'In every game we are creating chances to score goals and hitting the woodwork,' he says and he is right. The team isn't playing too badly, defensively they remain strong, but they are profligate in front of goal when they do create chances. Persija fans though don't seem to be in the mood to accept mice approach play. They want results and it is the actions of the supporters that will ultimately decide the coach's future.