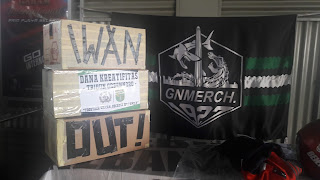 Just yesterday I had planned to do a post praising Persebaya as a club who were sticking by their coach even as the supporters were calling for his head and some had undertaken to boycott their beloved team until Iwan Setiawan had gone.

One reason why the club had chosen to be faithful to the coach despite his misdeamours in Martapura was an unwillingness to upset the mood or the atmosphere among the squad. I must admit in my time hear I had never come across such thinking before and felt it was worthy of praise. Typically clubs are quick to fire a coach as soon as the first murmers of discontent echo round the terrace.

Despite protests in the last two games, including Iwan's initials appearing in a choreo separated by a pig's head, Persebaya's new owners thought appeared to be of sterner stuff as they put team spirit first.

They weren't going to let the coach off that easily though and his one match suspension was doubled meaning he wasn't in the dug out when the team travelled to Yogyakarta to play PSIM. They came from behind to draw 1-1 meaning they had collected four points from two games since Setiawan had been suspended. Win their game in hand against PSBK and they would go top of the group.

However this morning the club announced they had decided to end Setiawan's contract after all. The decision was taken, the club said, after carrying out an evaluation over the last couple of weeks, never sure what that means, and taking into account the atmosphere among the players and the supporters.

The club are now looking for a replacement though as far as I'm aware no names have been mentioned yet.