An example of the changing face of Indonesian football later on today when Madura United host unbeaten PS TNI at Bangkalan Stadium. The last time these two sides were slated to meet in league competition was May 2015 in the aborted Indonesia Super League campaign when both clubs looked very different.

Back then, what am I talking about, it was only 24 months, Madura United were known as Perspasi Bandung Raya with the Bekasi based club having taking over Pelita Bandung Raya. PS TNI were known as Persiram, a side based in Papua but which played their home games in Java. Both sides have this season earned a reputation as being hard to play against, something that was rarely applied to their former incarnations.

PS TNI are unbeaten of course going into this game and are buzzing after defeating top of the table PSM last time out 2-1. However their physical approach hasn't been winning them many admirers and tonight they line up against Madura United without Manahati Lestusen and Abduh Lestalahu who have already earned the wrath of match officials and the PSSI disciplinary committee. 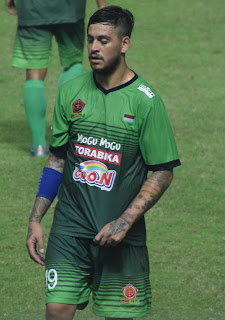 The military backed side though are not only about an in your face approach. They have some lads who can play a bit. There may have been some surprised faces after three games when the club ditched their coach Laurent Hatton and two of their foreign players but the players don't seem to have been too concerned. Indeed the addition of Leonel Jorge Nunez (pictured left), one time Johor Darul Ta'zim, and Facundo Talin should be seen as a step up in class on Aboubacar Leo Camara and striker Aboubacar Sylla as was evident from their performances against PSM on Monday night.

Facundo has sipped into the heart of defence and already looks at home. He looks to be an old school defender, one who howls at the moon if he thinks it would help his team mates, and one who seems to have adapted quickly to the Indonesian game if his performance on Monday is anything to go on.

Without the prowling menace of Lestusen and Lestalahu PS TNI will need to have Facundo at his very best. Madura United boast their own marquee player who has hit the ground running in Peter Odemwingie. The Russian born Nigerian international who played for Stoke City seems to have had little trouble in adapting to life in Madura having scored four goals in opening six games and his performances have seen Greg Nwokolo, a player who has been there, done that in Indonesia, struggling for game time with sporadic appearances off the bench.

Despite boasting such an abundance of attacking riches, Gomes de Oliveira's team have yet to find their shooting boots and despite ending against Perseru last time out with Odemwingie, Nwokolo and Boubacar Sanogo they had to make do with a single point against a team that generally travels pretty poorly.

This failure to finish teams off is costing Madura United. Scoring first against Persija is one thing, the Jakarta side have been struggling for goals all season. But an impressive showing away to Arema saw Madura take the lead through the impressive Aussie Dane Milanovic but they were pegged back when Cristian Gonzales scored from the penalty spot. Against PS TNI who have their own potent threats up front Oliveira will be hoping his array of striking options will be on target or the points could well be heading back to Cibinong.