Carlton Cole - This Is Bandung, Not London

Persib for 24 hours at least share top spot in Liga 1 with PSM. Both teams have 13 points and both have a similar goal difference. Victory for the Makassar side would see them go three points clear but the fact remains Persib are still unbeaten after seven games and handily placed to protect their title they won in 2014.

But the fans ain't happy. Yesterday's 2-2 draw at home to Borneo saw some fans stay behind after the game to jeer the players with one supporter yelling he was embarrassed by the team. Embarrassed? Bloody hell, some people think Arsenal fans are entitled. We saw #DjanurOut trending after Persib had drawn their opening two games of the season; it is trending again after yesterday's draw. What would the reaction be if they lost?

Despite going 1-0 down against Borneo yesterday, Persib clawed their way back into the game with a nicely taken goal by youngster Gian Zola and the reliable old warhorse Vladimir Vujovic turning in at the far post. From 1-0 to 2-1 up in 12 minutes isn't a bad fightback. The turning point came in 70 minutes when Michael Essien missed a penalty, skying  his kick high and wide. Borneo went on to equalise in the last minute through a glorious strike from Matheus Lopes.

Yes, a disappointing way to drop two points but not the end of the word, surely? Not an embarrassment?

When Carlton Cole and Essien arrived back in April I tweeted at the time if they were expecting any kind of honeymoon they had arrived at the wrong club. Their past deeds meant nothing in the eyes of the demanding Bobotoh who had their own definition of success. To be fair, missed penalty aside Essien hasn't done to badly, two goals in his seven appearances so far. But Cole has struggled to make an impression with just over 100 minutes playing time spread across three games. No goals and one yellow card. 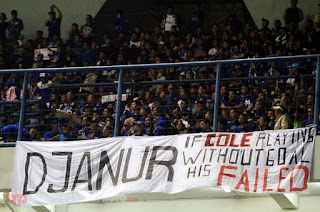 The impatient Bobotoh aren't impressed. One banner seen at the home game against Persipura said 'Djanur - If Cole Playing Without
Goal His Failed. That was 7th May during Persib's fifth game of the season. There were more banners at yesterday's game.

A harmless tweet yesterday gave an insight into the level of frustration felt by Bobotoh to the former West Ham United striker. All he did was ask people to check out his Instagram page but he won't have expected some of the responses he received:

right after your first goal mate

When Cole arrived in Bandung he said he was looking to score between 10 and 20 goals in the season but for whatever reason it's not happening for him. Looking from the outside it looked a strange signing from the very start. As a player he is similar to Sergio van Dijk and although van Dijk missed a few games through injury surely that was no reason to fork out a large amount of cash on Cole when something short term was needed. The Cole signing has all the marks of a vanity purchase.

Cole immediately found himself in the Bobotoh bad books soon after his arrival when he came on as a substitute to replace a young local lad Billy Keraf who was making his debut. Keraf had impressed the fans with his fleeting appearance but when coach Djadjang replaced the pacy youngster with the more experienced player, a very different sort of player, the fans were less than impressed. With Djadjang and Cole. Intriguingly they drew that game 2-2...with a goal conceded in the last minute suggesting the issues Djadjang needs to look at are more defensive than offensive. But as a highly priced import Cole is the easier target

Undoubtedly Carlton Cole is in a difficult position. He is at a club where the coach may not have had him on his wish list, struggling to get game time and is becoming a lightning rod for anger against the coach. None of this is his fault. He is not the first player to go through this at Persib where the fans readily admit they expect the best from day one. But they are also quick to offer respect to players who can turn their fortunes around. Cole has only to speak with his team mate Kim Jeffry Kurniwan who was the victim of the boo boys last season. He stuck in there, worked hard, kept doing what he is good at and turned the fans around.

Cole can do the same. He just needs game time. Unfortunately he may not even get that.