Two of the biggest names in Indonesian football, PSIM and Persebaya, meet tomorrow in Liga 2 in a clash that is sure to attract one of the largest crowds in South East Asia this week. But the final attendance figure won't be as high as it could be after local residents who live in and around the Sultan Agung Stadium said they didn't want to have any visiting Persebaya fans coming to the game.

Local residents got together to rally the game organisers and security officials saying they still remember the last time Persebaya fans came to town. It was back in 2012 when Persija hosted Persebaya 1927 at the same stadium in the old Liga Primer Indonesia. I'd best explain a few things here. The year 2012 was the height of duelism with two leagues featuring teams with the same name but different ownership. 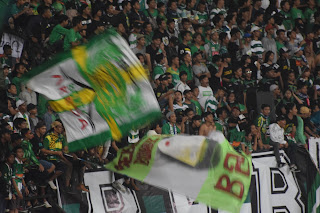 In that season Persija LPI were not allowed to play their home games in Jakarta, the local Jakmania who supported the other Persija, said the imposters were not welcome. Persija then hosted Persebaya 1927 in Bantul, a supposedly neutral venue but close enough to Surabaya to ensure a large following from the City of Heroes.

With no Persija fans in attendance, quite why people would want to run a football club without supporters has never been explained, the travelling Bonek kicked off in the streets and gangs around the stadium, making off with food and other items without paying and so on. The local residents haven't forgotten those scenes hence the appeal.

PSIM have agreed to the request and so instead of a large following from Surabaya swelling the attendance the home side will have the stadium to themselves.

This decision marks the second time a Persebaya away game has been impacted over security concerns. They have still to play PSBI after security clearance wasn't issued for the home side's small stadium and after some talk the game may have been played in Surabaya it could now go ahead in Blitar behind closed doors.

While many football fans have welcomed the return of Persebaya after a few years in the wilderness not everyone is so welcoming. The team's away games often see them followed by a large number of supporters, we are talking thousands, and small towns and cities aren't able to cope with the numbers or the  behaviour of some of the fans who cling to the Bonek ideal of seeing the game as cheaply as possible.