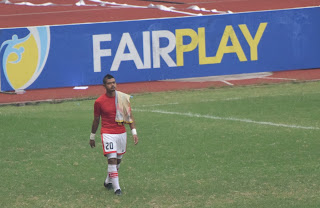 Bambang Pamungkas may no longer be a starter for Persija but the 36 year old striker is still the man who understands the club and the club's connection with its large fan base and his influence within the club remains immense.

That influence was evident last week when I saw the game at Persela. It was strange seeing him wearing a bib and warming up with the other substitutes at half time but there was absolutely no indication he was some big time Charlie going through the motions and engaging in some banter.

As the players came on for the second half Bambang was there with an arm around the shoulder and a quiet word for some of the younger lads, passing on his experience and his wisdom.

And after yesterday's disappointing draw at home to Mitra Kukar when a late equaliser from Mohamad Sissoko cost Persija three points, the home fans let their displeasure known as the players gave them a half hearted wave before heading for the tunnel. Even with the dissent echoing round the stadium Bambang was waving his team mates back out towards to the middle of the pitch to show some appreciation for the incredible support they had received during the game.

Marquee players will come, pocket large pay cheques and go but it is players like Bambang who understand the hold the game has on people and reassures us amid the sometimes brutal world of Indonesian football there are some people who can see beyond their own egos and bank balances.