Persib Bandung - What Can Carlton Cole And Michael Essien Expect?

Sunday sees Persib hold their official launching ahead of the new season which kicks off 15 April when they host Arema at the Gelora Bandung Api Stadium. For high profile new recruits Carlton Cole and Michael Essien this launching may come as a bit of a culture shock. Launches are common place in Indonesia, allowing the club to introduce their squad and kit to the fans, allowing supporters to meet and greet the players who will represent them on the football pitch. In other words the launch strengthens the bond that exists between club and spectator, something that no longer really exists in English football.

Cole and Essien of course have a shared heritage, having both played for Chelsea when they were somewhat younger. In Bandung they will be joined by another familiar name...Gian Zola is a promising young player who has recently been called up by Indonesia. No relation of course the the guy currently running Birmingham City (into the ground some may say) young Zola may be excited about playing alongside two former internationals with such glittering pedigree but he should never forget one thing. He knows Indonesian football. Cole and Essien don't.

So what can the big moneyed recruits expect from their time in Bandung with Persib? Unlike Chelsea, Persib are a club with a long, proud history and identity. Most Chelsea fans will be in blissfull ignorance about the era before a Russian guy with billions to spend came along and changed English football. Osgood, Hudson, Cooke, Bonetti, Droy. These names will be meaningless to a generation of hard core Blues fans.

Persib fans on the other hand do know their history. Hariono and Atep may be considered legends of the team 2017 but most Bobotoh if not all know exactly who Adjat Sudrajat is. They will also have a story to tell of the Final between Persib and PSMS at Bung Karno Stadium in 1985 when an estimated 150,000 fans saw the game. In my book Sepakbola The Indonesian Way Of Life one Persib fan recalls a the Puncak (the road linking Bandung with Jakarta at the same) being a a sea of blue. Current coach Djadjang Nurdjaman may be no Jose Mourinho but he understands just what Persib means to the local people. Born in West Java, played for Persib, coached Persib, he has been there,done that for the Maung Bandung. 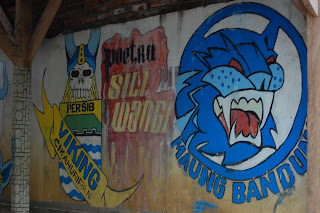 Bandung may boast a population of more than 2 million but it remains very much a one football club city. The nomadic Pelita Jaya have tried in the past to lay down roots in the area as have Pro Duta but neither could make any inroads in to the local population. Lee Hendrie, like Cole a former Aston Villa and England international, played for the short lived Bandung FC...they relocated to Kuningan in a futile bid to attract supporters. The city, along with the province of West Java, is blue through and through. Travel around the province and you will be the Persib crest painted on walls, the replica shirt hanging on clothes lines drying in the breeze, t shirts adorning kids hanging out with their mates. Across the length and breadth of West Java people bleed Persib blue.

Cole and Essien may recall their training sessions with Chelsea. Closed sessions far from prying eyes, they were designed to focus players minds on the next game. Indonesian training sessions tend to be more open affairs. One reason for that is logistic. Most clubs don't own their own facilities so must hire a public space. Persib are the exception. They do have Stadion Persib and the club often train there but fans often attend anyway, taking photos and asking for autographs from their heroes.. Quiet how Cole and Essien will take to these public shows of affection remains to be seen though there has been rumours suggesting the club have been looking for a more enclosed facility to help the foreign players adapt quicker. In Indonesia open training sessions are just one example of how close the relationship is between fan and player.

One other venue for training could well be up in the hills at Lembang along narrow winding , busy lanes where Cole and Essien can marvel at the popularity of rabbits. Sate kelinci, rabbit on a stick, is a popular local delicacy!

Bandung may be a large city but in many respects it is just a large village, certainly when it comes to football. Everyone is a Persib fan. Everyone. I have been out for a pizza with one player and we soon attracted a crowd of interested onlookers staring in awe at one of their heroes. Another player, who has since moved on, told me of the time he had run out of water and had gone to a local minimart in the early hours to top up. Thanks to Chinese whispers by the time the news got back to the club he was no longer just looking for some water but a totally different kind of drink.

As an Arsenal fan I grew up thinking nothing happened in cities like Leeds or Newcastle during the week. They were just places for football. The fact people lived and worked there and watched TV never really dawned on me. I thought they just lived for the weekend when they could see visiting supporters arrive in their city with a police escort and they could get up close and personal and call us cockney bastards. The converse used to be true of Bandung for me. Living in Jakarta I would go down to Bandung once in a while but it was with Indonesian friends who were attracted by factory outlets and where to buy the best brownies. Dull, mundane visits that never filled me with much enthusiasm. 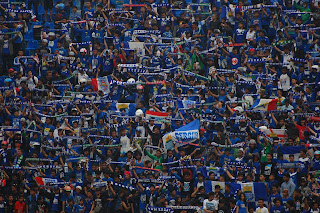 Then I started going down for the football and a different Bandung opened up to me. A city filled with creative, passionate people who love their local football club and go to great lengths to follow that football club. For some supporting Persib has become more than a day out with their mates at the game. They have turned their passion into mini cottage industries that support families. Through t-shirts, scarves, websites, books Persib fans are high profile and there is money to be made in being a Persib fan.

It's not always easy going to Bandung for Jakarta people. Cars registered in the capital city have been known to be attacked by Persib fans who feel a deep hatred towards fans of Jakarta side Persija. Once I went down to see a game at Siliwangi Stadium and we drove right outside the stadium in my wife's company car. To say we weren't welcome is an understatement. Fans banged on the car roof, called us Jakarta dogs etc. It was only when me and my mate opened the windows and showed the supporters we were just two dumb foreigners who had got lost the atmosphere changed!

That rivalry between Persib and Persija is deep and bitter. Recent years have seen fans die for not celebrating a goal with a lot of enthusiasm, the freeway connecting the two cities blocked as travelling fans fought with police and local supporters, a team bus attacked on the way to the stadium. The list is endless. When the teams meet no away fans travel and the players who are the away team usually go to the stadium in an armoured personnel carrier. Even when the game is played hundreds of miles away fans of both sides still manage to go toe to toe if there is enough desire.

The supporters can be a hard bunch to please but once a player does he can expect a relationship with hundreds of thousands of fans that will transcend time and distance. Players like Ilija Spasojevic and Miljan Radovic may have moved on a few years back but they remain in the hearts of the Bobotoh and thanks to social media keep their ties with the club thanks to hashtags and retweets. Once a Bobotoh, always a Bobotoh.

It remains to be seen what kind of impact Cole and Essien will have on Persib's season. From a playing point of view Cole is similar to Sergio van Dijk while the team are well stacked in midfield with the likes of Hariono and Kim Jeffrey Kurniawan, And it's not as if the new imports are likely to add more fans at the gate. I once wrote were Persib to dress 11 mannequins in blue shirts fans would be queuing for hours. Both players though will be hoping to add their own little footnote to a proud football club's long and proud history.

One English based website said Essien had signed for a team no one had heard of. Judging by the numbers on social media Persib must be one of the biggest clubs in the world...no one has ever heard of!