After so many long years in the wilderness, so many years fighting against the odds Persebaya are back in Indonesian football. Under the ownership of a media company based in East Java Persebaya will be competing in Liga 2 when the new season starts in April. Possibly. 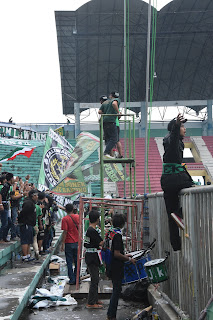 Iwan Setiawan has been tasked with building a new side on the pitch and can rely on the experienced Mat Halil to pass on his messages once the players cross the line and the ref blows the whistle. Off the pitch the new owners are promising changes in the way the football club is run, promising a more professional approach.

We have already seen evidence of this as some outstanding salaries accrued back in 2013 were paid to players. A simple gesture, and an expensive one, but a step inn the right direction to this idea contracts are just pieces of paper and a gesture other clubs, and not just in Indonesia, could learn from.

The problem is of course the money spent there is money that will not be invested in this team and their efforts to get back into the top flight where they, and their supporters, feel they belong. But it also sends out a strong message to players; your contracts will be honoured.

Persebaya's first tentative steps back into the big time came in Sleman where they are competing in the Dirgantara Cup alongside Persiba, Persekama, PSN, Cilegon United, Persebul, Persibo and PSMP. Drawn with PSN, Perebul and Cilegon United, Persebaya got off to a winning start defeating PSN 4-2 despite going behind to an early goal.

With minutes to go before the kick off the cheerleaders, fan celebrities in their own right, climbed the gantry and encouraged the masses to gather close together. After  quick prayer the chanting, dancing, drumming and flag waving began and never stopped until after the game. It was impressive being among the fans and seeing them catch up with each other. And despite impressions to the contrary their were women on the terraces and young children, Baby Bonek, the

next generation studying in the most important classroom of all.

For the thousands of travelling Bonek, both inside and outside the stadium, the result was perhaps not the most important thing. Their team were back and they were able to join together with their mates on the terraces once again, renew acquaintances and enjoy one more shared experience that will just add to the folklore and mystique that surround the followers of this historic club. 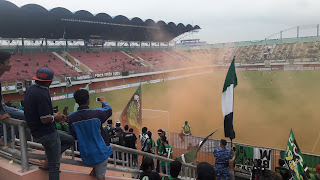 The fans struggle to keep the team alive gives them an influence fans in the English Premier League can only dream of. Arsenal for example hold a shareholders meeting where only those with a share, and there aren't many what with Kroenke gobbling them up, but reports coming from those affairs suggest bland sessions where the club management raise themselves on a dais, look down on the f ans and speak in much the same way without giving much away. It's all very corporate and dull.

After the PSN game, Persebaya management hosted a meet and greet session in Yogyakarta and I was kindly invited along. I arrived with some friends to see the new owners sat on the floor of a restaurant among the fans conducting a short question and answer session. Let that sink in. Arsenal management raise themselves up above the fans physically and visually while Persebaya management sit among them. No airs, no graces, no us, no them. Everybody was there for Persebaya. No pompous guy in a suit patronizing the supporters and thanking them for their interest in the club.

And this was no chit chat with approved questions being submitted in advance. Despite years of mismanagement by politically affiliated types there remains a suspicion of business in the football world. Other clubs have been the loser after being hyped by rich guys only to be dropped when they moved on leaving a mess. Fans had concerns. They wanted to keep the Bonek spirit alive and they sought assurances to that effect. At the same time they were keen to jump on board with club initiatives like 'No Ticket, No Game*', and a woman and children only stand at the Bung Tomo Stadium.

I was somewhat surprised to be asked to say a few words and so perhaps I became the blandest speaker there as I mumbled something about the Bonek passion and how Indonesian football needed a successful Persebaya. I felt a bit of an intruder to be fair, this was a Persebaya affair after all and I am an Arsenal fan. However I was happy to get involved and I must say the club owners, Jawa Pos, have been very supportive of my book.

How to explain the 'No Ticket, No Game' idea as something new. I was talking to one Persebaya fan who worked as a merchant seaman which of course took him around the world. He told me of the time he was talking with some Roma fans about what it meant to be a Bonek and these hardcore ultras couldn't believe what he was saying. Why would fans travel to games with no money? Why would they sit on the roof or hang on to the side of a train for hours just to watch their team? Why do they sit outside the same stadium when they arrive because they don't have the money for a ticket? Why don't they wear shoes? There were questions aplenty but this Persebaya fan, bought up with this tradition, this culture, couldn't answer even though his English is pretty good. In Indonesia the answer is simple. Because they are Bonek. Says it all. But it doesn't translate well for western minds whose favourite word is why.

There is a story to be told about whether Persebaya see themselves as an Indonesian Muang Thong United, a Thai side owned by a media group and currently impressing in the AFC Champions League. I suspect the answer maybe no, they are Persebaya with a history going back 90 years after all and a rebrand would not go down well with the support.

For more pictures and videos please visit Jakarta Casual on Instagram
This post is also available in Indonesian on Emosi Jiwaku, a Persebaya fan site.