While the eyes of the nation no doubt will be focused on Pakansari Stadium, Cibinong for the AFF Suzuki Final 1st leg between Indonesia and Thailand Central Java will be hosting its own big game that is sure to attract a healthy interest from fans. 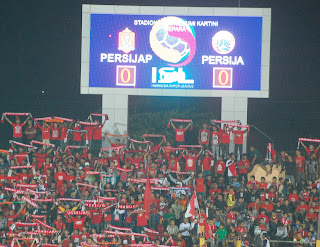 The Indonesia Soccer Championship B semi finals take place at Bumi Kartini Stadium (pictured left) in Jepara with four teams remaining from the 58 which had started the campaign several months ago.

The first game sees Maduran side Perssu take on PSS and this is likely to be the crowd puller. More than 15,000 fans saw PSS overcome Perserang in the quarter finals with the large majority of that number having headed north from Yogyakarta.

The second game has PSCS play Martapura from Kalimantan.

At stake is a place in the ISC B final which takes place at Manahan Stadium, Solo this Saturday.

While it is unlikely any of the four teams involved will be promoted to the top flight in 2017 when the Indonesia Super League returns local pride is at stake and for the large numbers of PSS fans who will be present at Jepara and Solo come what may this is their chance to show the nation they are among the loudest and brightest fans in the country despite their team's lowly status.

However they face a tough ask against Perssu. Football in Madura has been on the rise over the last 18 months or so, Madura United are flying high in the ISC while Persepam reached the last 16 in the ISC B. A new stadium in Pamekasan adds to the feeling the island is becoming a hotbed of football.

Martapura is a small town south east of the provincial capital of South Kalimantan while PSCS come from the town of Cilicap on the south coast of Java.