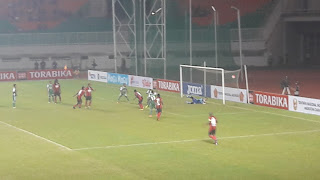 It's been a slow start to the season for Persipura but it looks like Jefri Sastra's men have turned the corner as they enter the Eid break with four wins in their last six games. However their 1-0 loss away to Sriwijaya was a reminder the current Black Pearls squad lacks the intimidating factor of recent years. Opponents think they have a chance, Barito Putera put four past them at Mandala Stadium before losing 5-4 while eight of their 11 goals scored came in just two games.

Unfortunately for the foreign players their names seem strangely absent from that scoring list with the exception of Koko Lommel's opening day penalty versus Persija. Boakay Eddy Foday and Thiago Fernandes have yet to hit the net and with a reduced squad going through training in Maang the club are looking at their options.

It won't have escaped the club's notice that Brazilian striker Luis Carlos Junior has been scoring for fun with struggling Barito Putera, 10 goals in nine games, And Malaysian Premier League side Perlis recently released their Liberian striker Edward Wilson Junior, a player well known in Indonesian after a successful spell with Semen Padang.

Perspiura sit fifth in the Indonesia Soccer Championship, five points off leaders Arema and while things have improved from the early days of the campaign when they drew two and lost their opening three games the lack of a prolific striker is proving a cause for concern.

Boas Solossa has long been a Persipura icon but even when he was at his imperious best he was ably supported by the likes of Ernest Jeremiah and Alberto Goncalves. Now Boas has lost a yard or two of pace it is imperative the other strikers pull their weight and that has not been happening and there must be a sense of disappointment the likes of Boakay, so prolific in his time with Persiwa, has not been contributing as much as would have been expected.

The Black Pearls next game is a week tomorrow when they travel to a resurgent Pusamania, three wins on the spin and always a tough nut to crack on home turf. Sastra will be hoping to have sorted his striking problems by then.