Indonesia's Classico - A Timeline Of Violence 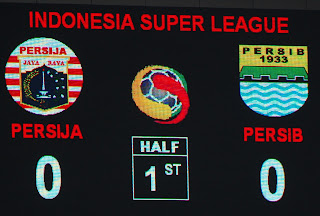 How to describe the Persija/Persib rivalry. It may lack the historical legacy of Barcelona v Real Madrid or the religious undertones of Celtic v Rangers but when it comes to animosity it must rank among the world's fiercest derbies.

A few years back I interviewed a Persija fan for his take on the rivalry between the two sets of supporters with the intention of balancing his view with one from the Persib camp...still not done that I'm afraid.

This is a rivalry where typically away fans don't travel in numbers. I know of one fan who did venture into bandit country and he had to stop along the highway that connects Jakarta with Bandung just to change the number plate on his car. Simply put if you have a Jakarta registered motor in Bandung on matchday, or the other way around, you are a target

I remember Bambang Pamungkas recalling a story about the derby. There were a couple of new foreign players with Persija and he says that as they were cowering on the floor in the bowels of an armoured personnel carrier on the way to the stadium they looked ashen faced. The discomfort was accompanied by the symphony of rocks and bottles hitting the surface of the APC as Persib fans sought to make their guests feel as uncomfortable as possible. 'Don't worry,' Bambang tells his shaking team mates, 'this is the essence of Indonesian football!'

Bambang is that rare footballer who unites fans of both sides. When it was reported he would be leaving Persija there were Persib fans who said they would welcome him with open arms. Not so his team mate of many years, Ismed Sofyan, who was most definitely cast as the pantomime villain in West Java.

Yet many players do play for both clubs without problems. Atep, a current hero on the Persib terraces, played for Persija for a while despite his 100% Sunda roots. Bahaikki Khaizan and Herman Abanda have also worn the orange and blue with no problems but then they are foreign players and so considered about the rivalry.

Such is the notoriety surrounding the fixture Indonesian film maker Yusuf Andibachtiar made a film about it, taking William Shakespeare's Romeo and Juliet and giving it an Indonesian twist...complete with violence of course. In fine Green Street tradition it starts with some fighting but soon develops into a lovey dovey tale with romance across the terraces between a Persija and Persib fan.

There was a peace deal that was supposed to have been thrashed out with the help of various police officers and Persib fans have twice filled Bung Karno Stadium in the last year but it is difficult to erase the years of mistrust and emnity that have built up between the two sets of supporters. Memories aren't erased with a handshake for the cameras and much more needs to be done at a grass roots level before we can see both sets of fans attending a game. But beyond the smiles for the camera very little is being done and the clubs themselves are not getting involved beyond the usual mealy mouthed statements. Barely a game between the two sides goes by without a major incident and as we have already seen this year with Persija their wild element seems to be out of control.

Persija hosted Persib at the Bung Karno Stadium in Jakarta and the game ended in a 2-2 draw. However three fans lost their lives in violence that marred the fixture including one who, if I recall correctly, was attacked for not celebrating a Persija goal with the required enthusiasm causing those around him to suspect him of being a Persib fan.

As the Persib bus was leaving a hotel in South Jakarta to head towards the Bung Karno Stadium for the game it came under attack from a gang of between 20 and 30 men on motorcycles. Instead of heading to the ground the bus headed straight for the highway and left Jakarta. As revenge Persib fans in Bandung attacked cars with Jakarta registration plates.

As is often the case Persija found themselves forced to play home games away from Jakarta and in this instance met their fiercest rivals in Sleman, a suburb of Yogyakarta. With the supposedly neutral venue fans from both teams travelled to the game and the inevitable happened with violence inside and outside the stadium as this video shows.

With a much reported truce between the two sets of fans in place Persija fans headed south for the game in Bandung only to be stopped on the highway by police who weren't keen on letting the estimated 25 bus loads continue on their way. The travelling fans weren't keen on returning home and kicked off blocking the busy road for several hours as they fought running battles with the police.

Several buses carrying Persib fans back from Palembang were attacked by Persija fans as they travelled through Jakarta. The Bobotoh had seen their team win the Indonesia Super League for the first time in South Sumatra and made their return trip in joyous mood but the Persija fans were in no mood to share their enemies joy, throwing rocks and bottles at the buses in the early hours.

The two sides never met last year. Of course the Indonesia Super league was cancelled and with all those cup competitions going on like President Cup and Jenderal Sudirman Cup they only way violence could be avoided was by making sure the two teams were not in the same groups. And that seems to be the sum total of calming things down...wishing the violence away.

Persib host Persija this weekend at the new Bandung Lautan Api Stadium and Persija fans have been told to stay away. There will be the usual intimidating atmosphere and no doubt the Persija players will stay in an anoymous hotel and will be ferried to and from the stadium in APCs. Let's just hope come Sunday we are talking about the action on the pitch and not the violence off it.