Are JDT Too Big For Malaysia? 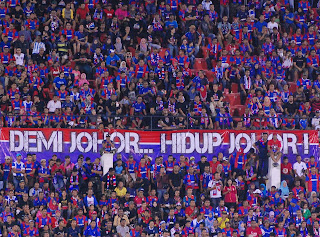 When I read that Malaysia's captain and inspiration Safiq Rahim had announced his retirement from the national team I raised my eyebrow and thought to myself 'oh yeah, what's that all about?' Why would the player at the heart of Malaysia's successes in years past suddenly decide enough is enough.

The 29 year old midfielder from Johor Darul Ta'zim won the SEA Games in 2009 and the AFF Championship in 2010 as well as being runner up in 2014. In terms of Malaysian football he has been there and done that and at his age he patently has more to give both on the field and in the dressing room. So why quit?

He is not the only one to turn his back on the national team. Defender Aidil Zafuan, who turns 30 next month, has also decided the time is right to stop playing for the Harimau Malaysia even though he has been less of a fixture lately.

Now when something happens once well, it happens. When the same thing is repeated we think well yeah, it is a coincidence. But a third time? Pacy S Kunalan, who turns 30 in September, has also announced he no longer wants to be considered by the national team. Like Safiq and Zafuan he plays for Johor Darul Ta'zim.

Three players quit the national team. Each plays for the same team and is around the same age.

This year sees the AFFF Championship and the mass defections from the national team will be a blow for national team coach Ong Kim Swee as he tries to improve on being losing finalists back in 2016. But then the Malaysian national team hasn't had much to brag about since then as the results from this year testify.

Their World Cup Qualifying campaign saw them beaten by Palestine 6-0. Twice. Oh, and that 10-0 reverse against UAE.

Over that same period Johor Darul Ta'zim have won the Malaysia Super League, FA Cup Charity Shield and for good measure the AFC Cup. They have made no secret of their desire to compete in the AFC Champions League in the neat future. They are currently two points clear in the Malaysia Super League and earlier this week began their Malaysia Cup quest with a draw at home to PKNS.

In short JDT are a club that are doing things, that are moving forward. The national team is a tired collection of players that seems, from the outside and from the record books, to lack the spirit and vitality of a club side like JDT. The national team of course is also run by the Football Association of Malaysia and there is no love lost between them and the successful club from the south of the country.

The contrast between the two cannot be starker. JDT are, love them or loathe them, the future of Malaysian football and the FAM, and all they represent, are the past. Perhaps Safiq and co have just decided the national team offers them little in the twilight of their careers and if that is the case then it is one more sorry indictment for the suits at the FAM who singulalry failed to build on the successes Safiq and co enjoyed just a few years back.

The conclusion is clear. JDT are getting too big for Malaysian football and instead of playing politics the FAM need to take a leaf out of the upstarts book and start thinking big. And of they can't do that perhaps they should follow the lead of Penang and step aside to allow professionals to take over.