Persebaya's Bonek Won't Give Up The Fight

Surabaya is known in Indonesia as the City of Heroes, Kota Pahlawan. It dates back to an almost forgotten war that carried on while Europe and the US, which means the rest of the world as they write the books and make the movies, came to terms with the end of Hitler and World War Two.

Back then there was no Indonesia. In fact there was but the Netherlands refused to recognise it. They still saw the collection of islands with their own languages and cultures as part of their empire and despite being kicked out by the Japanese they wanted to carry on as if nothing had changed.

Instead of returning home as victors, British soldiers who had fought in the far east were forced to stay on and fight on behalf of their Dutch allies as local militias rose up against their European occupiers. Soekarno had declared independence but the fighting never went away.

Surabaya was scene to some of the bloodiest fighting before the war ended and the Dutch belatedly gave up on returning to their role of imperial masters. And the city of Surabaya was enshrined in the folklore of the new nation. It stood up against the colonials and while they may have lost the battle in front of superior firepower they went on to win the war.

Today and Indonesia is comfortable in its skin as a nation but the people of Surabaya are still fighting, still taking on the arrogance of power only instead of the streets of the city this battle is being fought over a football club.

Persebaya are one of the big names of Indonesian football. Formed in 1927 they boast one of the largest fan bases in the country. They just don't boast a football club any more.

Back in 2011 Persebaya made the decision to join what was then the rebel LPI. To keep the Persebaya name alive a club was bought from East Kalimantan and parachuted into the second largest city in the country. The fans weren't happy. The same fans who turned out in force for an LPI game against Arema, 55,000 of them, turned their backs on this upstart Persebaya despite them using the same club name, badge, colours. As far as the supporters were concerned there was only one Persebaya. 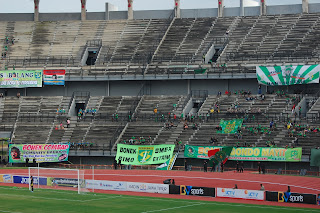 When the duelism era ended and we were left with one league it was this outsider Persebaya who were left to carry the mantle and the fans, known as Bonek, voted with their feet. Persebaya were playing their home games at the 60,000 capacity Bung Tomo Stadium but there were just a couple of thousand fans watching. The Bonek stayed away. This wasn't 'their' Persebaya.

When the ISL was stopped in 2015 one of the reasons cited was the confusion over the two Persebayas. Unfortunately the newer one, the one from East Kalimantan, had friends in high places. Unfortunately those friends weren't high enough and the league stopped.

Persebaya, the one 'recognised' by the PSSI, changed their name. First to Persebaya United and had their been a trades description act in Indonesia that would have been fun! For the Bonek in the street they were not Persebaya and to use the word United? Pah. In a futile bid to appeal to the support the club changed their name, in the middle of a competition mind, to Bonek FC and guess what? That didn't work.

In 1945 Arek Suroboyo had fought the foreign invaders. Now they were fighting the powerful in local football with the only weapon they had. Their support.

Bonek FC was obviously a non starter and so the club changed names again, this time to Surabaya United and now of course have become Bhayangkara Surabaya United after a merger with PS Polri. They  may finally get a fan base of their own but the real Persebaya fans will continue to stay away. For them it is all about Persebaya.

Surabaya is the second largest city in the country with a population of more than 3 million. It may be one of the largest cities in the world without a top flight football club. In recent weeks Persebaya have rejected a merger with Surabaya United and said they would not be entering Liga Nusantara, the third tier of Indonesian football. The City of Heroes has just a football club no one loves and a side called Laga FC in the top two divisions and until Persebaya can emerge triumphant from their struggle for recognition that won't change,

The Persebaya fans with their proud heritage of taking on the big guns will be with them every step of the way.