I do think the SLeague marketing egg heads have missed a trick. We are not fully into the second round of fixtures in the new season and we have already seen the Uniform Derby, The East Coast Derby and now they are trying to promote Tampines v Warriors as the East West Derby even though it is being played in the centre of Singapore. Ish. What about the Ho Derby? New signing Plazibat scored the only goal of the game in the first half to leave Home United with just a single point from their opening two games of the season.

Nominally the home side, Al Yarmouk stayed anchored in 12th place after  gritty performance against a committed Khaitan at the Khaitan Stadium. The away side were 2-0 up at half time but  Al Yarmouk gave it a real go second half and fully deserved to pull a goal back ensuring a few nervy moments at the end. 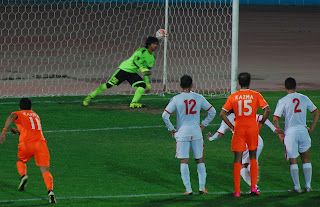 Another interesting game played at Al Salmiya's Thamer Stadium, Kazma had the chances to win this comfortably but second half especially Al Sulaibikhat were dogged and determined in defence. Kazma had taken the lead and deserved it as well but then spurned further chances to extend their lead. They also missed two first half penalties and when the Al Sulaibikhat keeper was red carded for a reckless challenge that led to Kazma's second spot kick surely the team in orange were set fair for three points. Twas not to be as the first job of the sub keeper was to save the 2nd spot kick and he made three more vital saves in the dying embers of the first half to keep his side in the game.

Uruguayan born El Loco gave Arema the lead in the first half, showing age hasn't dulled the predatory instincts after the Bali keeper Diky Indriyana failed to clear the ball. The natrualised Indonesia striker made it 2-0 when he headed home an inch perfect free kick from Raphael Maitimo in the second half. Former Arema player Gede Sukadana pulled one back for the home side with a delightful chip from 20 yards out with 13 minutes remaining but Malang born Johan Ahmat Alfarizie restored the two goal cushion just minutes later to give new coach Milomir Seslija a winning start to his return to Arema

Dejan Antonic was another coach to get off to a winning start with Persib edging PSS in a goal fest in Bali. Samsul Arif, who signed from Persib just ahead of the competition, marked his debut coming off the bench to score in the 89th minute while Emile Mbamba, who reportedly was set to stay with Surabaya United until evidently making the last minute switch, also netted a late spot kick.

Comments:
I'm really happy to have discovered your website! I appreciate your care and assistance! You know what... Do you know how to write an abstract for a research paper? I'm in need:(