A few days back I was penning, nay keyboard punching, the virtues of Cristian Gonzales, now approaching 40 but still netting for fun in Indonesia. Last night I was watching another ageless, timeless one putting in a shift but this time at the other end of the pitch. 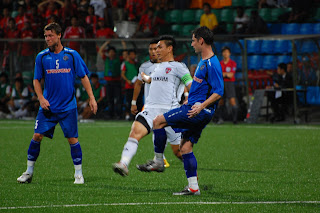 For many, Daniel Bennett is inexorably linked with Warriors/SAFFC. He spent more than a decade with the club over three spells and lifted the SLeague five times in a glittering career. Just turned 38 you could forgive him if he contemplated a quieter life but oh no, for the 2016 season Bennett, pictured in action for SAFFC against Muang Thong United, will be wearing the unfamiliar green and white hoops of Geylang International wearing the even more unfamiliar number eight shirt.

Yet if last night's performance against Young Lions is anything to go by all the familiar skills are there as Bennett turned in a faultless performance marshalling the Geylang defence against the pacy young cubs.

You don't get the snarling, chest pushed out, fist punching old school English style centre half with Bennett. No John Terry or Tony Adams, rather the English born, Singapore raised central defender plays with a calm assurance and, lacking pace even at the best of times, an astute footballing brain that last night at least saw him comfortably handle players half his age.

Traditionally Warriors were a team packed with experience...a polite way of saying older players and of course Bennett was just one of many. Now however he is one of the elder statesmen at Bedok where his experience is doubly valued in Jalaini's youngish squad and he seems to be relishing the role with the odd quiet word here, a finger point there to help his colleagues at the back.

He shone with a performance of cool, calm authority and when his defensive partners were caught upfield he slipped effortlessly in to their vacant space and dealt with the danger before trotting back to the centre of the defence without the rants you may see from higher paid prima donnas.

To Tampines the headlines but Geylang and their supporters will be looking for Bennett to work quietly behind the scenes and on the pitch to forge a winning mentality that could surprise many this season.