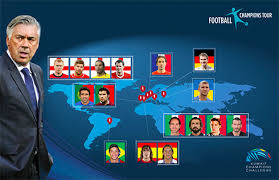 FIFA it seems aren't taking kindly to the idea players like Andrea Pirlo and Steven Gerrard could be lining up in a glorified circus game/friendly next week in Kuwait.

In the letter which is dated 9 December member associations are reminded Kuwait have been suspended from all football activities since the middle of October 2015. It seems the Zurich based organisation have heard about the all star game being held to celebrate the opening of the Jaber International Stadium and do not like the idea of players registered with clubs registered with MAs, in plain English the likes of Pirlo and Gerrard, coming to the gulf state.

Earlier this week the Kuwait FA distanced itself from the all star game on its official website, saying they were not involved in any way with the game despite the Kuwaiti side drawing on players from the local Premier League. The proposed game also coincides with a full round of KPL games scheduled for that weekend and it remains to be seen whether or not those games go ahead as normal.

While FIFA's epistle makes no mention of any sanction on players and coaches who do head to Kuwait, and the team is slated to be coached by Carlo Ancelotti who is said to be making dovey eyes at Manchester United, it does make clear that players and coaches in both Kuwait and Indonesia, another recipient of a suspension this year, are in a difficult situation.  Of course when foreigners headed to Indonesia for their rebel league a few years back, FIFA did squit!

Will the game go ahead? Too much has been invested for it not to but whether the big names who are currently under contract to clubs will be allowed to come remains to be seen. Would Paul Scholes for example, a part owner of Salford City who are a member of the English FA, make the trip? Meanwhile Jamie Carragher as a TV pundit has potentially less to lose by playing.

Medical services did some rehearsals at the 60,000 seater venue yesterday and it is hard to imagine the fireworks or the singers would be stopped but as to who plays...that will no doubt be a cause for conjecture over the next few days.