Coach Eka Takes The Long Road To The Top

What do coaches and footballers do when the world governing body FIFA and the government suspend the local association, essentially putting football in lock down. Some look to careers outside the game to put food on their tables with stories rife of big name players opening restaurants, lesser known players getting behind kaki limas and others using their motorcycle as an ojek.

Others have basically become boots, or chalkboards, for hire, waiting for a club to hire their services for unofficial competitions like the President Cup or the Independence Cup.

But one young coach has taken an entirely different approach. With the Indonesia Super League shut down he reached for his rolodex and his passport and is now coaching in the Middle East with little known Bahrain side Al Najma.

From Indonesia with its passionate crowds of 20,000 plus at the big games to a tiny gulf kingdom, what can Bahrain offer an Indonesian he can’t find in his own backyard? Well, apart from experience, a stint in Bahrain seems to be well regarded in the coaching fraternity with the likes of Steve Darby (current coach of the Laos national team), Vjerun Simunic (ex Brunei coach now with Perak in Malaysia) and Dragan Talajic (with Thai giants Muang Thong United) cutting their teeth there. And of course there is the small matter of a recent World Cup Qualifier which in which Bahrain defeated Indonesia 10-0.

Then again Rudy Eka Priyambada has always been one to try something new. He started coaching back in 2001 at ISCI, a private sports club that caters to the international community in Jakarta before moving on to gigs with international schools in the capital.

It is certainly an interesting place to begin in football but lacking any kind of professional football career the football association were somewhat wary of this fresh, bubbly newcomer in his early 20s. He failed his C license, a blow that may have ended the ambitions of another wannabe coach but Rudy is no ordinary coach. ‘I used the rejection to motivate me,’ he says when he met in a hotel in Bahrain last weekend.

Far from Indonesia he may be but he had just come from Friday prayers and he ordered an iced lemon tea suggesting he would not be forgetting his roots in a hurry even though the football establishment failed to notice his talents. He continued to study for his badges and all the while his close contact with Jakarta’s expat community improved his language skills no end. It was his growing competence in English that saw him attend an AFC training programme in Malaysia in 2008; every year member associations are invited to send coaches on these course but with many Indonesian coaches having little grasp of English the invites would remain unopened. But Eka jumped at the opportunity and he ranked first among ASEAN coaches and received a scholarship to spend time in Germany where he studied for his A license, a necessary to coach at the highest levels.

‘After (Germany) still Indonesia doesn’t care about me, doesn’t give me a chance to be involved,’ he says. With Indonesian football crying out for quality coaches this head in the sand attitude from the PSSI does seem a bit odd but it may be some consolation to Eko to know that had Jose Mourinho been born in Jakarta he too would never have got the chance to coach either.

Eko brushed off the rejections and reached for his passport once more, this time to Australia where he tapped into his expanding international contacts and met with a number of senior football officials there. With glowing references he went door knocking and he ended up at Monbulk Rangers.

Hardly the most glamourous club in the state and a far cry from Melbourne Victory in the ALeague but he didn’t care. He was coaching and he was learning. Those months weren’t easy. His days would often begin at 3 am as he worked in a bakery to make ends meet. In the lower reaches of Australian state league football there is not a lot of cash to be found and Eko was forced to get creative. He needed the dough so he worked in a bakery, he cleaned tables, he washed dishes. ‘Work 3 o’clock. 12 o’clock go back to the flat. Five o’clock coaching until nine o’clock.’ And he lost his family, his wife leaving him and taking their son. One more knock back and one he wears on his sleeve; as well as his twitter profile. He started his journey with a burning ambition to be a coach. He now wants to be a father to his son. ‘I will make my son proud of me.’

It was that ambition that caught the attention of Indra Sjafri, another young coach who was doing things the unorthodox way. He had though been recognised by the PSSI and appointed coach of the national Under 19 side. Indra recognised Eka’s drive and perhaps saw a bit of himself in the young coach and appointed him as his assistant. Again it wasn’t a job overflowing with cash; ‘Rp150,000 petrol money,’ he laughs, ‘but doesn’t matter.’

With the break up of that successful side following the finals in Myanmar the coaching duo went their separate ways, Indra to Bali United Pusam and Eko to Mitra Kukar, an unfashionable but fairly well run club in East Kalimantan, as assistant coach. If Eka thought he had arrived he was to be disappointed. Just when you think things are going well football has a way to slapping you in the face again and the suspension of the PSSI saw the ISL halted after just two rounds and saw players and coaches left twiddling their thumbs.

Well, many did that. Eka twiddled his rolodex and an old mate from a previous training course invited him to talk in Bahrain. ‘I’m not here for the money,’ says Eka, his eyes as ever on the bigger picture. ‘I want the experience from working somewhere new, that is important.’

There is big money in Middle East football. The Qatar Stars League and the Arabian Gulf League are slowly producing sides to compete with the best in China, Japan, South Korea and Australia in the AFC Champions League. They don’t have an Al Ain and they can’t attract the likes of Xavi while at international level they have yet to win a trophy. But as the experiences of the coaches mentioned earlier testify it does offer the talented and the ambition an opportunity to burnish their credentials in a competitive league and that is what Eka is after. And with that it was time to leave. 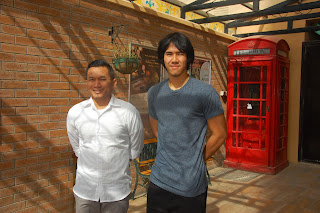 With his positive outlook the young coach is embracing life in Bahrain, learning the language and of course finding time to hang out with the local Indonesian culture though he does balk a bit at the prices for a rendang! It has been a bumpy road so far for him, one that has seen zero encouragement from his own FA to losing his family to having his first job in the big time end almost before it had started but he remains optimistic and he remains fixed on his goal. ‘I want to learn.’