I arrived in the Middle East just as the mercury was rising and the regional leagues were coming to a close. I managed to catch a couple of games in Kuwait as well as a President's Cup tie in the UAE but it was all really minimal. It was all a bit like catching the tail end of a movie, all very exciting for a climax aficionado or some glory hunting tosser but but knowing how the season ended didn't really interest me. I wanted to know about the twists and turns that brought us to that destination.

So I knuckled down for a hot summer with little football. Information is perhaps even hard to find in this part of the world than it is in Indonesia, especially for a non Arabic speaker but somethings don't change. For example Kuwait recently announced it would be cancelling the 2015 Gulf Cup because their stadiums aren't ready.

That decision seemed to have had a knock on effect around the gulf as leagues, which had already started preparing for the new season which took into account a break in December for regional rivalries, scampered to react to this drastic move. The UAE's Arabian Gulf League had already announced its fixtures, how would they react for example?

Other countries like Kuwait and Bahrain had promised to announce their domestic fixture lists during July but till now nothing appears on their website, at least in the English language sections, while we are still waiting on the Qatar Star's League to post theirs. Oman's Premier League kicks off tomorrow according to its website. 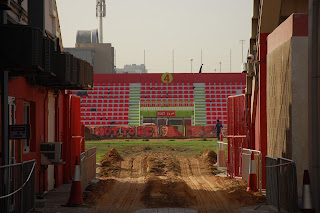 But it is the Arabian Gulf League that will be attracting my attention, at least until the action kicks off closer to home and tomorrow sees Al Ahli kick off their campaign at home to Al Fujairah. I popped round to their ground on a visit back in May but the turf was being dug up and while the stadium, left, looked a nice tidy affair, and right next to Stadium metro station, it was a bit like seeing a high class courtesan stripped of her make up...am looking forward to catching a game their anon.

The six time UAE champions, once coached by David O'Leary, have the obligatory Brazilians including 26 year full international Everton Ribeiro in the squad now in the hands of Romanian Cosmin Olaroiu, overcame 2014/2015 champions Al Ain in an all UAE AFC Champions League tie back in May and they face Iranian side Naft Tehran in the quarter finals with the first leg on 26 August, hence the early staging of their opening AGL game.

Champions Al Ain start their defence with a home game against Al Dhafra on Saturday...now I am no expert on geography but does this count as the longest journey to be made in the league? Al Ain have lost the services of prolific Ghanaian striker Asomoah Gyan, who has headed east for the lure of the yuan, so they will be looking to Nigerian Emmanuel Emenike to fill the gap left by the former Sunderland man. The 28 year old striker has come in on a season long loan from Turkish side Fenerbache.

When it comes to glamour clubs fallen on hard times, Al Wasl fit the bill. They play Al Jazira in their opening game on Saturday with Portuguese international Hugo Viana recently added to their ranks, coming in from Al Ahli; Viana spent a few years with Newcastle United in the early days of his career.

Seven times UAE champions and once coached by Diego Maradona, success has been evasive in recent years with just one title to their name since 1996/97. The success of the 1980s seems a long time ago but it seems their fans have stuck by them...a bit like Liverpool I guess in England!

A final word about an ex Arsenal lad. Denilson conjours up memories of Wenger's failed Project Youth when he strived to build a title winning side around supposedly hungry young players brought up on the Arsenal ethos. Unfortunately many of them just weren't good enough and Denilson fell into that category. Such is the apathy towards him even his English language wiki entry hasn't been updated to show his arrival at Al Wahda.

Champions in 2010, Al Wahda also boast a Kuwaiti international in their ranks, Hussein Fadhel, so they could be a team I will be keeping an eye on for the coming season though it is unlikely they will be mounting any serious title bid over the coming months. Still, could be an excuse to visit Abu Dhabi...sod all other reason to visit!

As for my backyard? Both Al Qadsia and Kuwait SC feature in AFC Cup quarter final action next week so something to look forward to there at least. Certainly it would be nice to jump on a bus and catch a game rather than heading to the airport.

COMMENT - this is not meant as a preview, more the ramblings of a football starved expat stuck in the 50 degree heat of the Middle East gagging for a gargle and a game. A more informed preview can be found on the excellent Ahdaaf website.

The tournament will be hosted by England[nb 1] from 18 September to 31 October 2015. Twickenham Stadium in London will host the final.

England was chosen to host the competition in July 2009, beating rival bids from Italy, Japan and South Africa. The competition's organisers, Rugby World Cup Limited, had recommended England to the International Rugby Board (IRB; now known as World Rugby.

Of the 20 teams competing at the 2015 World Cup, 12 of them qualified by finishing in the top three places in their pools in the 2011 World Cup. The other eight teams qualified through regional competition. Of the 20 countries that competed in the previous World Cup in 2011, there was only one change – Uruguay replaced Russia.