Once upon a time there was Persisam Samarinda Putra. A team from East Kalimantan in a city that has more decent stadiums than the whole of Jakarta.

Known for a large fan base, Persisam attracted much larger crowds than nearby Persiba and Mitra Kukar.

Then politics stuck its ugly nose in. Persisam were taken over by someone who the fans weren't too keen on. The fans formed their own team, Pusamania Borneo while the new owner of Persisam rebranded his team Pusam. 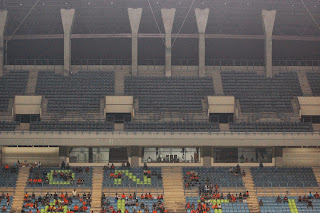 Last season saw Pusam play in a cavernous stadium in front of a tiny number of fans (pictured) in the ISL. Pusamania competed in Divisi Utama hving bought the license of Perseba Super Bangkalan.

Pusam struggled all season while Pusamania earned promotion from Divisi Utama and football fans in Samarinda were looking forward to the possibility of a Samarinda derby in the ISL this year.

However, having lost the battle for the hearts and minds of the supporters, Pusam scouted around for a new home before deciding on Bali where they rebranded themselves Bali United Pusam.

It seems the two sides have now made up because they are due to meet in a friendly match later this week at the Segiri Stadium in Samarinda.