The thing with these types of friendlies is that smaller team, in this case Indonesia, has nothing to lose. Win and everyone is surprised. Lose and well, it's ok. 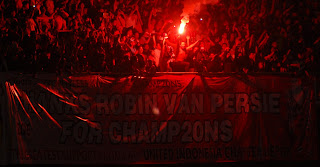 No one really could have expected Indonesia to have gone in at half time 0-0 against the Dutch. That they did so was thanks to Robin van Persie's profligacy in front of goal and an outstanding performance from the back line including keeper Meiga Kurnia whose handling was flawless for the whole game.

It was at the other end Indonesia were struggling. Forced on to the back foot by the Dutch the home team were forced to go long looking to release the pacy Boas Solossa but while he did cause a few problems too often he was easily brushed off the ball by the larger Dutch defenders.

If coach Jacksen F Tiago can take some joy from this performance then it would be those first 55 minutes. Much of that was against the Dutch trinity of van Persie, Wesley Sneijder and Arjen Robben who had come on as an early substitute when the visitors failed to get past a defence featuring Dutch born Raphael Maitimo.

It was when van Persie and Sneijder went off that the Dutch started to make their pressure and experience tell with a couple of simple goals from substitute Siem de Jong the Ajax striker. Twice the ball was stood up from the flank and twice he rose to net.

The goals seemed to deflate the Indonesians. They faded rapidly and while substitute Andik Vermansyah came on to lift the crowd and provide a handy cameo that will burnish his own reputation they produced little. Arjen Robben slalomed through the defence at the end to make it 3-0 and give it a comfortable sheen for coach Louis van Gaal.

After the match van Gaal praised Meiga Kurnia's performance while the travelling Dutch media seemed more interested in why Wesley Schneijder was not captain. They love their dressing room rifts those boys!

Comments:
The one thing that bothers me a lot was that Jackson did not quickly dismiss Toni Sucipto. The fact that Shaken or Kraken or wharever his name was terrorizing our left flank is just unacceptable. It could've been only 0-1.

Cant put the blame on tony alone for that two goal, de jong was left unmarked before he netted that two easy goal. Which begs the question mark about how many times Indonesia defence had lost their concentration in 2nd half.