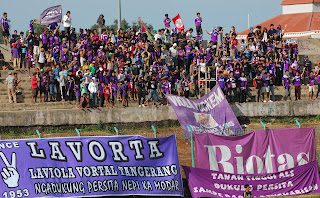 Persita Tangerang were forced to play their games away from the Benteng Stadium in their home town after local mullahs and clerics, pissed off with inaction from others, declared football at the venue haram following several outbreaks of disorder (I hesitate to call it crowd trouble) forcing the Laskar Benteng Viola as well as co tenents Persikota to play their home games elsewhere.

Persita won promotion back to the Indonesia Super League and will play their home games in Kuningan which is a bloody long way from Tangerang.

They are hoping their new stadium, which will start next year, will ready within a couple of years and they can return home.

Good luck on that! For some reason building stadiums in Indonesia is never an easy operation.