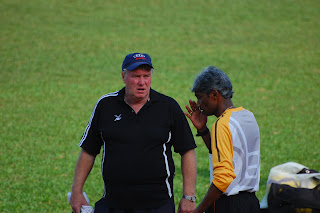 FIFA have actually made a decision. Nope, it's not April Fool's Day.

Like much of South East Asia, Thai club Si Sa Ket have been dicking FIFA round for a pretty long time. They were ordered to pay former coach David Booth $225,000 back in February but of course they never bothered. (Complete story can be found here).

Now FIFA have decreed Si Sa Ket must pay 483,000 Thai Baht or face being deducted six points. If they fail to pay then the club will be automatically relegated.

Good luck to Booth, who is now coaching Phnom Penh Crown, getting his money back. But aren't FIFA's threats all a bit hollow? Do Si Sa Ket even exist anymore?

FIFA have shown in the past they are all piss and wind when it comes to South East Asian nations; with the exception of Brueni who they suspended but then they are a tiny country and no one goes there for holidays.

The Indonesian FA have been happily ignoring FIFA for several years and the world's governing body have done nothing beyond send some stern letters.

What makes anyone think this will be any different?