Blackburn Rovers fans have spent all season trying to get rid of the club owners who they blame for Steve Kean, Alan Shearer leaving and the rising cost of petrol. They wave their banners, they chant You Don't Know What You're Doing then they rush to get the bus to get home in time for tea.

Persib fans recently decided they had tired of Persib manager Umuh Muchtar, known in these parts as Um-Mourihno. Certainly under his stewardship the club, one of the biggest in the country, have become nothing more than also rans. Coaches have come on gone, accusations of player power have filled the air and Persib are no nearer winning a trophy. 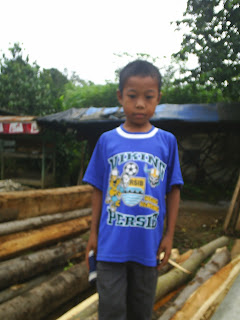 So the fans are revolting. Their home game against Persipura was played behind closed doors, apparently because said Umuh didn't fancy the protests that were being promised by the Persib faithful, win or lose. Persib lost 1-0 and I understand, though cannot confirm, there were some disturbances in the streets around the stadium.

To be fair, Umuh has done some things right. Persib do have the look of a modern day football club about them. They sell replica shirts, have an official website and sell advertising boards. No big deal? It is here, in Indonesia!

News today that Umuh is considering stepping down. A speedy response by the Persib fans that could have their counterparts in Blackburn salivating, wondering what more they can do.

Thing is the Persib fans don't give a shit and have nothing to lose so throwing the odd brick or whatever doesn't phase them too much. Them Blackburn fans would shit it if they missed the last bus home or got their match programme creased.

Hello Everybody,
My name is Mrs Sharon Sim. I live in Singapore and i am a happy woman today? and i told my self that any lender that rescue my family from our poor situation, i will refer any person that is looking for loan to him, he gave me happiness to me and my family, i was in need of a loan of S$250,000.00 to start my life all over as i am a single mother with 3 kids I met this honest and GOD fearing man loan lender that help me with a loan of S$250,000.00 SG. Dollar, he is a GOD fearing man, if you are in need of loan and you will pay back the loan please contact him tell him that is Mrs Sharon, that refer you to him. contact Dr Purva Pius,via email:(urgentloan22@gmail.com) Thank you.