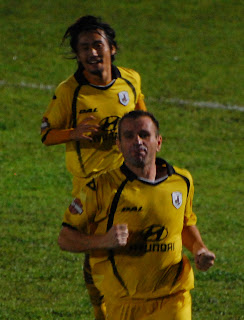 In a new bid to attract more interest it seems the SLeague have come up with a novel way of releasing the fixture list for the new season. Taking a leaf from the harry Potter movies they are announcing them bit by bit. The logic, such as it is, is that if it's good enough for JK Rawlings' teen magicians it's gotta be good enough for the SLeague. And anyway, who he hell believes in wizards anyway?
I asked Mabel if she thought the drip drip approach to a new season had been modelled on Harry Potter but she wasn't sure. Instead she thought it was a crock of shit. The slow release of fixtures, not the Potter movies. She has always had a crush on those little guys who work in the bank.
Anyways, enough of my waffle. Here are the opening round of fixtures. Coming soon will be the dates they will be played. And then the complete fixture list will be announced. If anyone is still awake. 'Cos the Frenchies pulled out at the last minute there is an odd number of teams and Geylang United will sit out the opening round of games.
Young Lions v Woodlands Wellington
Albirex Niigata v SAFFC
Home United v Balestier Khalsa
Gombak United v Harimau Muda
Tanjong Pagar United v Hougang United
DPMM v Tampines Rovers
# posted by Me @ 7:55 PM