FC Dordoi go into tomorrow's penultimate league game against second place Alga knowing a win would secure them their 12th Premier League title. Victory would give the Bishkek giants an unassailable lead at the top of the table and a vastly superior goal difference.
Should Alga earn a surprise win however they would go into the final round of fixtures next Tuesday level on points with FC Dordoi and a tricky final game against Neftchi who are themselves waiting on a Dordoi slip up.
Tomorrow, Neftchi face an Abdish-Ata side who have gone off the boil in recent weeks with three draws in their last five games, a run that has seen the Kant side slip down to fourth, effectively ending their own title challenge.
Dordoi coach Alexandr Krestinin will be hoping his team can find the free flowing football which had seen them crush Kaganat 8-1 a couple of weeks ago. Against Abdish-Ata and Alay in their last two games they have struggled against motivated opponents and tomorrow's game won't be any easier. Alga are known for keeping things tight at both ends, their 12 games have produced a total of 20 goals, and Krestinin will want his top scorer Mirlan Murzaev to rediscover the form that has seen him score eight goals this season.
1. Dordoi 12 9 2 1 29-8 29
2. Alga 12 8 2 2 13-7 26
3. Neftchi 12 8 1 3 22-13 25
# posted by Me @ 8:03 PM 0 comments

The details have been announced for this year's national cup competition and with many other countries around the world it has beenmassively  curtailed by the coronavirus.

Just seven teams from the premier League will enter the cup with the league champions not entering the competition and the runners up receiving a bye until the semifinals. As with the remainder of the KPL, the Kyrgyz Republic Cup will be held in Kant.

Neftchi are the current holders have defeated FC Dordoi Bishkek in last year's final 1-0 in Jalal-Abad.

Dordoi have won the cup the most with 10 wins under their belt while Alay Osh have lost nine finals!

My first day in Bishkek coincided with Match Day 10 of the Kyrgyzstan Premier League but it was too short notice to get anything arranged and anyway there is a company paying for me to do other, non football stuff so it was only polite to put in an appearance there and show them I’m a real person and not some random guy they had been emailing for the last couple of weeks.

On the pitch Dordoi Bishkek comfortably brushed aside Kaganat 8-1 to cement their place at the top of the table while runners up Alga edged Kara Balta 2-1 to stay three points behind the leaders. Dordoi, owned by a local conglomerate with interests in retail among other businesses had only been founded in 1997 and had won the league a record 11 times and the last nine years have seen them and Alay (a team from the southern city of Osh) share the title among themselves.

Traditionally football has never been a major draw in Kyrgyzstan. During the Soviet era the Kyrgyz Soviet Socialist Republic and the Turkmen SSR were the only regions not to have been represented in the Soviet Top League and today with funds tight better players from around the region are attracted to the wealthier clubs in neighbouring Kazakhstan and Uzbekistan domestic league crowds tend to be counted in the hundreds rather than the thousands though there has been greater interest in the national team in recent years.

The 2020 Kyrgyzstan Premier League kicked off in March but was halted by the coronavirus after only a round and a half. It wasn’t until five months later that the remaining two league games were played to complete Match Day 2. Because of the pandemic the league was centralised with games being played in the town of Kant, perhaps a 45 minute drive east of the capital, and no spectators allowed in.

Dordoi's mauling of Kaganat gives the comfort of a substantial goal difference going into the final four Match Days and they will be particularly wary of third place Abdish Ata who have home town advantage and a confidence building six game unbeaten run behind them. First meets third next week and a victory for Abdish Ata would really throw open the title race with Alga also waiting for the leaders to slip up. 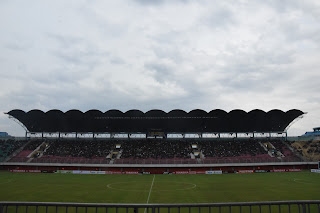 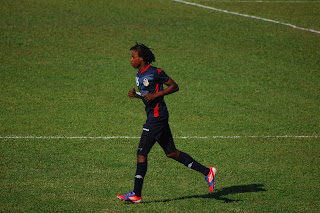 I first saw Mohamadou Sumareh playing for PDRM back in 2014 in a top of the table clash against Felda United and he must have impressed me as I seemed to have taken a number of photos of him. However, he really had me on the edge of my seat when I saw him score twice for Malaysia in an AFC Asian Cup Qualifier at Bukit Jalil in a 5-1 win over Timor Leste. That raw potential which had so impressed me five years earlier had blossomed into the real deal and he lit up the sparsely populated stadium.

And now he has left Malaysia. Typically, I think it's good for a player to try his luck overseas. They can 'find' themself as a person of course but they get their eyes opened to a different culture, a different way of doing things and they become more mature.

But reading the news that the Gambian born winger has signed for Police Tero in Thailand, has left me feeling a tad underwhelmed. Not for the player of course. If the rumours about his not being paid for several months are true then of course he is perfectly entitled to go to a club where he can look forward to a regular pay cheque.

No. My feelings of misgiving lie in a different direction. Malaysian football is changing. The switch from state associations to privately owned football clubs is supposed to improve the management of the game and, I hope, provide us with a club, or clubs, which can challenge Johor Darul Ta'zim for the title.

Imagine a club like Selangor for example snapping up Sumareh. Think of the boost that would have given to the players and supporters at Shah Alam as well as sending out a strong message to the rest of the league that the Red Giants mean business once more.

For sure, Police Tero have got themselves an excellent talent and Sumerah ca sleep easy at night knowing he will be paid for his efforts but Malaysian football will be the loser if it keeps losing its most exciting players.