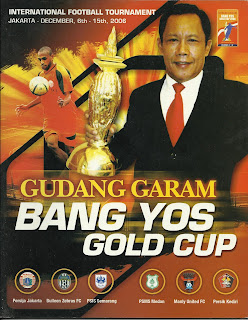 Once upon a time there was a team called PS TNI. Not a team so much, more the armed forces Football Association who would ocasionaly muster a team to play against the national team or club sides in friendlies. As a team associated with the military and only playing on a ad-hoc basis, they didn't of course have a natural fan ba
se but for some reason in South East Asia that doesn't seem to be an issue, at least for club owners.

When the domestic league was suspended in 2015 we saw a period of rough and ready competitions cobbled together to keep players busy, turnstiles clicking and TV stations paying. With no oversight from FIFA, or AFC, it was basically anything goes and into this vacuum leaped the military, and the police, with their own teams and fans were remarkably underwhelmed to see PS TNI and PS Polri playing proper games against proper teams.

PS TNI merged with PSMS with gave them a sheen of legitimacy in the eyes of the PSSI and allowed them to compete in the stop gap competitions. However PSMS later decided they wanted to go their own way again so PS TNI looked around for another way to be piggy backed into the top flight of Indonesian football, eventually 'merging' with Papuan side Persiram. It was a take over to all intents and purposes and now Persiram has all but ceased to exist.

So for the unofficial, in the eyes of the rest of the football world, we had PS TNI playing in the Indonesia Soccer Championship at Pakansari Stadium, Cibinong, a stadium far too large for their support, much of which was bussed in from local military barracks.
When the FIFA ban was lifted PS TNI remained in the rebranded Liga 1 and kept playing home games in Cibinong. A club with no fan base playing at one of the nicest venues in the country. Meanwhile the real local side, Persikabo, were struggling against relegation from Liga 2, deprived of cash yet possessing a more than decent fan base of their own.

The 2017 season was a constant struggle against relegation for an inconsistent PS TNI and it wasn't until coach Rudy Eka Priyambada came in that the team settled down and eventually ended in a comfortable mid table position. Persikabo could find dug-out saviour and ended the campaign bottom and heading for the ignominy of Liga 3.

For 2018 the powers that be decided what PS TNI needed was a rebrand so the name was changed to PS Tentara Indonesia Rakyat (Indonesian People's Army), or PS Tira for short and the club 350 miles east to Bantul in Yogyakarta. At least they had no fan base to worry about upsetting.

If the move was expected to attract more supporters it didn't work as crowds averaged less than 1500 at their new home and most of those would have been away supporters! Again the team struggled on the pitch despite the 21 goals of Aleksander Rakic and they only just escaped relegation. I guess the humiliation of PSMS and PS Tira going down would have been too great!

Perhaps in response to the poor attendances but a few weeks back PS Tira announced they would be returning to Cibinong and the rest of the football world was left wondering what had been the point of the Bantul experiment in the first place? There are military associated teams throughout South East Asia but none attract sizeable followings because, umm, they are military associated teams. Supporters are keen to follow new teams but not ones coloured with uniform influences. 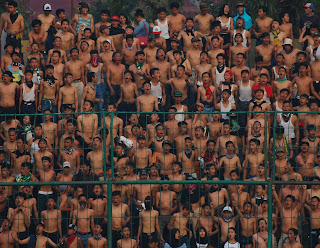 One the one hand Persiram/PS TNI/PS Tira/PS Tira Persikabo seem to have learnt one lesson from their travels and that is to try and build an identity with the local community. On the other hand the military connection continues to loom large. And what about the Persikabo supporters, known as Kabomania (pictured left)? What do they feel about this merger? Were they involved in the process?

There is more to Kabomania than just a bunch of supporters on the terraces. They run a thriving SSB (football academy) and are a massive part of the Cibinong community. How are they going to react to seeing PS Tira just roll up and take over? The original Persikabo will apparently continue playing in Liga 3, under PS Tira management, which begs the question. What is in it for Persikabo and their faithful supporters?