I  must admit to a feeling of massive underwhelment at the recent 'changes' announced by the Football Association of Singapore as they bid to improve the state of their flagship SLeague. Remember, this is a league where the last eight trophies have  been won by just one team, Albirex Niigata, which features precisely zero local players.

Local giants Tampines Rovers, Home United and Warriors have struggled to play catch up as the Japanese side reinvents itself each season and still goes on to dominate the Singapore scene. Will the latest proposals provide the impetus to end the White Swans' local domination as well as provide a conveyor belt of young talent for a moribund national team?

The main change appears to be the introduction of age quotas. Local clubs must have a squad of between 19 and 25 players. If a squad has 22 players a minimum of six players must be aged 23 or under while a further eight must be aged under 30. I must admit age limits leave me thinking 'meh'. Isn't it just tinkering round the edges of the problem especially when the Young Lions will continue to exist? Surely if you want to introduce age limits then do so but disband Young Lions as well and disperse the squad around the league?

Albirex Niigata now have the option of signing two Under 23 local players. Woo. Why would they want to given they dominate the game without any locals? On the other hand why limit to two? If the aim is to make Singapore football more professional and Albirex Niigata are obviously the most professional side in the country why not open the door to more local lads?

A coach's job is to get the best out of his team and the key word here is his team. He should be the final arbiter of who gets signed, who plays and who gets replaced, not some desk jockey. If a coach is being forced to field teams to fit regulations rather than a game plan and his team loses will the club be sympathetic to the extra demands placed on him by these new regulations?

Some good news at least from these new proposals. The pointless League Cup is to be ditched.

It is heartening to see some of the more ambitious Indonesian sides look to foreign shores when it comes to preparing for the 2018 season.

Both Madura United and PSM have lined up intriguing pre season tournaments that go beyond the usual dull old trofeo format that has become popular in recent seasons.


Let's hope these tournaments do go ahead. They not only provide local teams the chance to pit their wits against regional rivals but also the opportunity for supporters to see players and teams from different lands.

The PSSI chairman has been in the news recently. The military man who is also a candidate for the governorship of North Sumatra has reacted angrily to the prospect of Indonesian footballers having the gall to go and ply their trade overseas.

He first made the comments when Bhayangkara duo Evan Dimas and Ilham Uddin were signed by Malaysian side Selangor, calling the pair unpatriotic, whatever that means.

Sadly the notion of nationalism is never far from the surface in political discourse and it's not just Indonesia as we see countries like UK and USA dress up obscene policies in the bows and ribbons of patriotism.

This though is the first time I have seen footballers being accused of lacking a love of their country because they want to try their luck overseas. Football has long embraced globalisation and it is common to see players pack their boots for foreign lands.

Indonesia of course has benefited. The national team is coached by a Spaniard. A Scotsman led Bhayangkara to the title. A Brazilian is one of the most successful coaches in the country. A Montegran and a Uruguayan have become naturalised Indonesians in recent years.

However the PSSI chief hasn't backed down. he has now taken to saying any players that don't answer their nations call up are traitors! As he cranks up the flag waving rhetoric it is easy to see how impressionable young men who have been brought up in a culture where deference to 'superiors' is imgrained (part of the nationalism I guess?), may have second thoughts about advancing their careers overseas.

Where is the players' union APPI in all this? Are they standing up to the PSSI by explaining ow football works and how the national team can benefit from players being exposed to different environments? Surely if there was a time for the likes of Bambang Pamungkas and Ponaryo Astaman to speak up it is now? For a generation leagues and players have benefited from trying their luck in different leagues. Now is not the time for Indonesia to go inward looking but it needs the experienced pros to stick their heads above the trenches and speak out.

Golly. A month off. Things have been pretty hectic as I struggle to adapt to my latest country but am still keeping in touch with Indonesian football and all that entails. As I try and wean myself back into the writing habit something gentle to start off with.

So, DPMM want to join Liga 1? The Brunei side it seems are a bit peeved by some of the new regulations imposed by the Football Association of Singapore and have been casting around in search of a new home. For some reason they think Indonesia would be a good fit and, given their history, traditions and fan base seem to think they are eminently qualified to jump straight into the top flight and pass by minor inconveniences like promotion from Liga 3 upwards.

Unlike Singapore and Malaysia I don't recall any foreign teams taking part in the Indonesian football eco system. Simply put Indonesia doesn't need an outsider to come along and make up the numbers. Wanna add a team to Liga 1? PSS? PSIM?

The PSSI admit the suggestion from DPMM is being discussed. Football's governing body does move in mysterious ways so who knows what they will decide but when you consider the current chief is a military type who recently slammed a couple of Indonesia's finest young talents for having the temerity to play overseas, he said they weren't patriotic enough, it does seem unlikely DPMM will get the green light, whatever the sultan of that nation may offer.

Still, if Indonesia does want to take on a foreign team might I suggest Coventry City? DPMM have their own home ground and everything. Coventry already have many of the criteria a proper Indonesian football club needs.

The Sky Blues have fallen on hard times since they were relegated from the Premier League at the end of 2000/2001 the club have lurched from one disaster to another. They left their home off 106 years, Highfield Road in 2005 to move into the brand spanking new Ricoh Arena but the team's inability to regain their top flight status meant they were struggling financially and with all the big TV deals being signed in their absence Coventry found themselves missing out on both riches and a home.

With attendances falling and Coventry falling down the divisions, they were relegated to the third tier at the end of the 2012 season. Fans fell out with the owners who in turn seemed to fall out with the stadium owners forcing the club to look elsewhere for a home. There were rumours of groundsharing with Walsall and even an offer of Ricoh Arena rent free but ultimately the club decided they would play their home games in Northampton, a round trip of 70 miles.

Now by Indonesian standards 70 miles isn't that far but many Coventry fans turned militant. The club made the move in time for the 2013/2014 season and large numbers of supporters boycotted their team. Their one season in Northampton was marred by small attendances and the unusual sight of some fans standing on a hill overlooking the stadium cheering on their team while refusing to buy any tickets. They hired buses, went through the usual match day rituals and sang their songs...they just point blank refused to hand over any money to the club and its owners.

The following season and Coventry returned to the Ricoh with over 27,000 seeing their first game of the campaign. The return home sadly didn't end the sorry saga. The stadium was bought out by Wasps, a rugby union club who used to play in Wycombe and once more Coventry City are mere tenants, a proud, famous football club left homeless in the brutal modern age where money is the arbiter of all and history counts for shit. 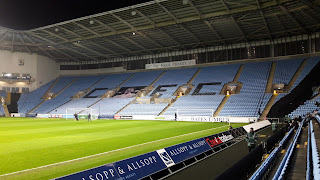 Having seen Coventry City games at Highfield Road and in Northampton it seemed appropriate I take the opportunity to see the Sky Blues at the Ricoh. And how disappointing it was. Make no mistake, the stadium is owned by Wasps, they get the crowds and the football club get the scraps. I got the impression they were very much unwanted tenants; there was little to indicate a football club founded in 1883 exists at all. Any branding was Wasps related. Finding the Coventry City ticket office was a mission and as for the club shop? It's located under a railway line in a nearby retail park!

Coventry City are now in the fourth tier of English football. They defeated Wycombe Wanderers last night 3-2 to climb into the top four as they aim to get promoted. But having seen the old Highfield Road in its glory, an old school stadium big on fences, rocking to a full house it is sad to see how the football club has fallen to this uncomfortable existance.

A nomadic club with a supporter boycott and unpopular owners; Coventry Cit would seem to be a perfect fit for Indonesia!