Group One Descending Into Farce As Pro Duta Withdraw

If I'm being totally honest I couldn't find Persih on a map. I know they come from somewhere in Sumatra but quite where I have no idea until I check wikipedia*. Playing in Group One of Liga 2 they are a football club that rarely makes the news even though they have been a regular name in the second tier for several years.

They caused ripples earlier this season when they never turned up for one of their own home games. The visitors, PSBL, turned up. They went on the pitch, took the obligatory team snap and waited for their hosts who never came. A long, fruitless journey from Aceh province in the north of Sumatra turned out to be quite decent after all as PSBL pocketed a 3-0 victory by dint of a walkover.

A week later and Persih no showed again. This time it was they who were supposed to be on their travels as they were supposed to be playing group leaders and favourites to be promoted PSMS. Another walkover and another 3-0 loss to go on to the league table.

Last weekend Persih returned to the football pitch as they made the journey to Pekanbaru, the nearest thing they have to a local derby if we exclude Kepri 757 on the island of Batam which maybe geographically closer but not necessarily easier to get to. Persih must be wishing they stayed at home as they were beaten 6-0 by title challenging PSPS. Had they not bothered travelling they would have only 'lost' 3-0!

This weekend they are scheduled to host PS babel Timah. Who knows what will happen there. Even without the walkovers Persih are bottom of the table with just three goals and three points to show for their efforts. 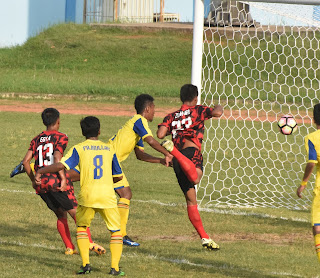 That solitary victory came over Pro Duta (pictured in action left) who sit one place and two points above Persih. Well, they did until yesterday when the club announced they would be withdrawing from Liga 2 ahead of their game against PSMS this weekend.

In many countries there would be an outcry at two football clubs acting in this way during a season but, and I hate to say these words, this is Indonesia where the unusual is the norm and no one is batting an eyelid. In the eyes of many the group has been long decided anyway, the games are just part of a procession to the coronation.

*They come from Tembilhan on the banks of the Indragari River and a six and a half hour drive from Pekanbaru airport.