The last time Persipura lost at home was against Persib in the Indonesia Soccer Championship last July, The last time they lost on their own patch in the league was five years ago to the day...well, minus one day. When Boas made it 3-0 with nine minutes remaining it looked like yet another game, set and match for the Black Pearls. Bhayangkara fought back however and a goal from Furtuoso, his third of the season, om 83 minutes set the game up for a nervy climax. Ilham scored in injury time to make it 3-2 but by then it was too little, too late.

The bottom two sides met up at Tri Dhamma Stadium in front of a sparse crowd but Persiba's new coach Milo Seslija was unable to halt his side's poor run. Gresik's win puts them three points ahead off the cellar dwellers who will be hoping their return to Balikpapan in the near future will spark a recovery of sorts.

A fourth straight clean sheet but Persib were unable to secure the three points that would have seen them overtake PSM at least temporarily. With Sergio van Dijk still unavailable and Carlton Cole struggling for form, did he really say he would score 20 goals this season, Djanur started with Shohei Matsunaga up top but he was unable to break the deadlock against a resolute Semen Padang side

Back to back wins for Sriwijaya but so much depends on Hilton and Beto remaining fit all season. After the game Sriwijaya coach Osvaldo Lessa was impressed by the performance of marquee player Tijano Belaid and his team. 'We won because of our quality and hopefully we can climb the league in the future.' 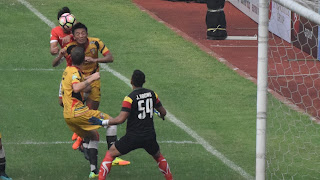 Teco Out! The cry went out at the final whistle after ex Liverpool midfielder Mohamed Sissoko netted a last minute equaliser to deprive the home side of a valuable three points. Persija now have one win, two draws and three losses from their opening six games but while this point ended a three match losing streak it was not enough to cheer up the home support. After the game it took veteran Bambang Pamungkas to force the players to show some appreciation to the fans as the team headed to the dressing room in sombre mood. Later some of the fans heckled the team as they got on the team bus to return home. Persija are 15th in the table now but at least have another home game to ook forward to when they entertain Bali United next weekend. After that they face a tricky trip to Perseru. One story doing the rounds suggests Teco has those two games to turn things around.

One point from the last two games means Arema have fallen a little bit off the pace after their fine start to the season and here they needed a second half penalty from Cristian Gonzales to save their blushes against a resolute Madura United side. Again Arema went for Gonzales and new import juan Pino meaning no starting place for Dedik Setiawan again after scoring three goals in his first three games. Since opting for the expensive foreign strikers Arema have failed to score from open play and it must be concering coach Aji Santoso they have scored five goals from their six games this season.

Pardon the pun but when you take on PS TNI you know you will be in a for hard fight but this game was ultimately marred by one of the worst refereeing performances it has been my misfortune to witness. The first half was shocking by the man in the middle and their were supporters around me calling for the hapless whistler to be replaced at half time. 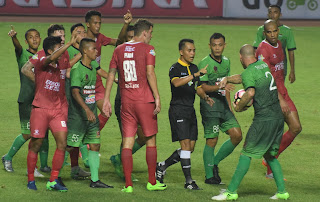 The old adage was you had to earn the right to play and if you wanna play against PS TNI then you need to match their physical approach. Then again this is Indonesia and that ploy may not be appreciated in certain quarters. The Army Men do get in the faces of their opponents early on but make no mistake, they can also play a bit. Surprisingly Laurent Hatton was replaced as coach despite being unbeaten after three games but Ivan Kolev has come in, replaced the foreigners, kept the physical nature but added some guile especially up front.

Elio Martins and Leonel Nunez have impressed since they arrived, Nunez's goal was nice, and at the back Facundo is that old school defender, bawling instructions non stop and ready to argue with anyone not on his side. But PS TNI aren't all about the foreigners. They also boast promising young talent like Manahati Lestusen. But as they set about PSM who have shown themselves to be a more than useful side themselves it is worth pointing out the home side were without Abduh Lestalahu while Gustur Cahyo Putro only came on in the second half and Guntur Triaji never got a run out.

Second half, when the ref focussed more on his job, PSM had the chances to earn at least a point and fully deserved it would have been. In Wiljam Pluim they have perhaps one of the finest imports of recent seasons while further forward Reinaldo showed the benefits a bruising centre forward can bring to a team.

The second 45 minutes was as good an advert for Indonesian football as the first was bad. Despite the quality in their squad it remains to be seen whether PS TNI will ever appeal to a fan base beyond off duty military personnel wearing military fatigues no matter how good their support was. As for PSM, they will play much worse and still win.