Persija have finally found a new coach. They were forced to do so after the Indonesia Soccer Championship said they would not allow caretaker Jan Saragih to stay in his post because he lacks the required A licence.

The Kemayoran Tigers have turned to Zein Alhadad to fill their hot seat and the low key appointment perhaps sums up where Persija are these days as a football club. Without a home while Bung Karno is being renovated, without a win in 10 games and struggling to find players from those cast off or rejected by other clubs Persija are a pale shadow of their former selves and the appointment of the little known Zein seems to confirm that suspicion.

Zein did work with the Indonesia Under 23s alongside Aji Santoso at the SEA Games in 2015 when Indonesia reached the semi finals but were thrashed 5-0 by Thailand. They ended up finishing fourth in the competition after losing to Vietnam by the same score in the 3rd/4th place play off.

Whether he can do much to change Persija's fortunes is a moot points. The problems lie elsewhere. However for a guy used to working with young players Zein has some promising players to choose from as he sets about trying to turnaround a disappointing season. 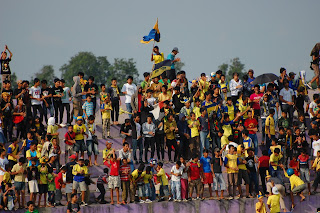 When I started following Indonesian football Persikota weren't a big team but they were always there and there abouts in the top flight. They attracted decent crowds to Benteng Stadium in Tangerang and caused problems to bigger sides who came to visit.

The last few years they have been in the football wilderness much as the city of Tangerang has been. With Benteng Stadium a shadow of its former glory, weeds and grass taking over the terraces where thousands once sang and swayed, fans in the industrial city to the west of Jakarta have been denied top flight football for a while now. Persita have been playing home games in Karawang, to the east of Jakarta while Persikota have all but become a memory.

I did see them play in Division One back in 2014 but they played those games in Cilegon and failed to secure a place back in Divisi Utama but now fans have the chance to see them aga
in as they compete in the third tier Liga Nusantara.

Persikota have been drawn alongside Persitangsel, Persic, Serang Jaya and Bantara SC and will play their group stage games at Mini Ciputat Stadium near Bintaro. 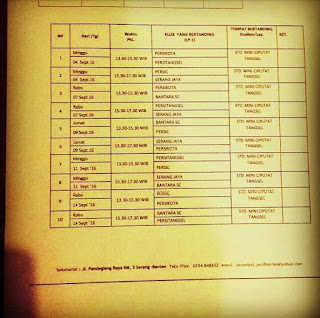