So Persib fans can finally get to see their team at the new 38,000 capacity Bandung Luat Api Stadium for the first time but the game with unbeaten Mitra Kukar comes with conditions. 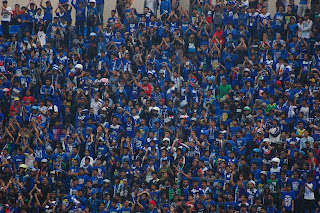 1 - Capacity is being limited to 20,000*
2 - Only East and South stands will be open
3 - West and North stands as well as VIP and VVIP will not be open for this game
4 - Cars must use the toll road
5 - Cannot use flat bed trucks
6 - Fans are asked to behave themselves and follow instructions from security personnel
7 - Fans must buy tickets and cannot take flares etc inside the stadium

Given Persib's less than flying start to the new season, just one win in six games, surely it is the Bobotoh who should be giving the club the conditions under which they will watch the game!

As this will be Persib's first game at the new stadium I wonder if the club will be selling commemorative merchandise to mark the occasion?