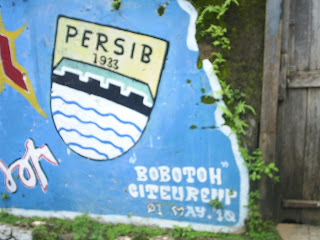 It was only a friendly between Persib and PSAD last Thursday at Siliwangi Stadium but it didn't stop an estimated 15,000 Persib fans, known as Bobotoh, turning up to see their heroes.

Let's put this into some kind of context.

In the same week Manchester United attracted are supposed to be the biggest club in the world. They hosted Newcastle United in the Capitol One Cup, the latest sponsor of the League Cup, and 46,000 went to the game.

Chelsea, they won the Champions League last season and are followed by millions around the world ever since they were founded in 2004, played Wolves in front of 32,000.

And Manchester City, you know them what won the Premier League last season? I saw father and son walking round Jakarta yesterday in their latest City shirts, bless 'em. Anyway everyone's latest favourite team played Aston Villa and just 28,000 bothered making the journey to Maine Road...sorry, wherever they play now.

Of course if this were a blog about English football then I would slip in the small fact that Arsenal attracted 58,000 in their 60,000 stadium but ... what the hell!

Comments:
THERE IS NO CLUB ON THIS COUTRY BIGGER THAN PERSIB

WE ARE BOBOTOH (SUPPORTER OF PERSIB) VERY PROUD

a friendly against amateur team attracted 15.000 people.. hats off for bobotoh..