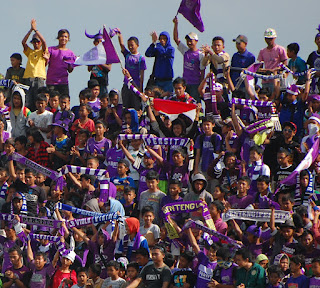 Persita Tangerang's thoughts are turning to the new season after winning promotion to the Indonesia Super League.

Their problem lies in the fact that they cannot use Benteng Stadium in Tangerang after a religious organisation imposed a fatwa prohibiting football being played there.

That followed several incidents of crowd disturbances and rock throwing that involved fans from Persita, their cross city rivals Persikota and local residents who would get pissed off with the fans running amok every home game.

After considering using Siliwangi Stadium in Bandung they are now looking at using Mashud Wisnusaputra Stadium in Kuningan, West Java.

While Kuningan itself has no top flight team the stadium was used by Bandung on occasion during their short lived spell in the IPL.

Of course the problem with any team playing in West Java is the small matter of Persib. The province bleeds blue.

Perhaps a better option for Persita would be Singaperbangsa Stadium in Karawang. Much closer to Jakarta even though it is still in West Java, the stadium was used by Pelita Jaya last season but if their proposed merger goes ahead they could well be looking for new tenants.

Comments:
I think that Persita Tangerang's thoughts are correct, they have to do just that in order to have a better or positive results, I read an article about this on a pay per head bookmaking sportsbook