A Ref Copping It Big Time 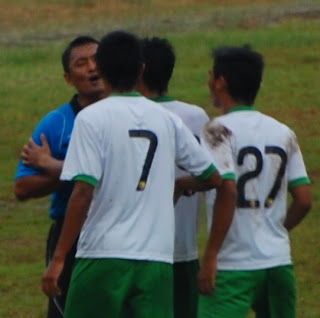 Complaining about referees in Indonesia is rather like saying the weather is a bit unpredictable in Manchester. The pea blowers are back in the news for the usual reasons...well, one is.
Following a 0-0 draw between Persija and Persisam the home coach was so pissed off he quit, blaming the ref! He came back a few days later mind.
Now Simon McMenemy, coach of Mitra Kukar, is having a pop at the same ref, asking 'how can a coach prepare his team for a big game when one individual has the power to decide the outcome?'
It's an open secret that refs are intimidated into favouring certain teams in Indonesia but no one wants to come out and say it. You want proof it happens? Check the home records of teams. And please don't retort by pointing to Chelsea or Manchester United's home records in recent seasons.
Certain club owners don't see football as a sport with winners and losers. They see it as a personality contest all about them and defeat reflects badly on them.
They're the ones who need to grow up.
(Picture is another ref in another league trying to explain a decision that went against the away team)
# posted by Me @ 4:57 PM